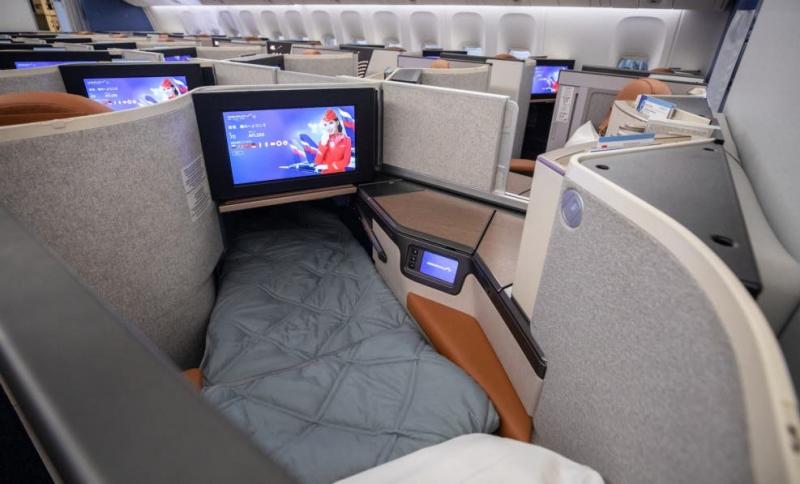 Aeroflot Russian Airlines has brought advancements to its long-haul offer with he debut of the first of its retrofitted Boeing 777-300ER aircraft. The aircraft will be one of three of the type due to be flying in the arrangement before the end of 2021 as the Russian flag carrier aims to bring its flagship 777 fleet to the levels enjoyed by its new Airbus A350 airliners, which debuted with the airline last year.

The arrival of the first A350-900 in Feb-2020 marked “a new level of sophistication” to the Russian flag carrier’s “award-winning customer service” with a brand new cabin design offering “unrivalled passenger comfort,” according to the airline’s promotional material. But, this left its 777-300 fleet of 30 aircraft – a mixture of -300 and -300ER versions – the mainstay of its widebodied operations, looking a little tired.

These aircraft had started to arrive back in 2013 and while perfectly acceptable to the airline’s customers – the carrier has the world’ strongest airline brand, according to Brand Finance (‘COVID may have turned the world upside down, but Delta, American and United remain the most valuable and Aeroflot the strongest airline brands’) – certainly did not have the same frills offered on the new A350 arrivals.

Aeroflot’s first A350-900 arrived in a three-class cabin layout with 316 seats: 28 private business class Suites, including 2-metre full-flat beds; 24 Comfort economy seats with extra legroom; and 264 economy class seats. The Suites – the Horizon from Collins Aerospace – certainly offered an improved level of comfort for business class, with a high level of privacy and personal space and a dedicated bar area offering an extensive range of drinks and snacks.

The aircraft also featured an advanced lighting system with colour changes according to the stage of the flight. In addition to the latest generation Panasonic eX3 in-flight entertainment system, HD screens and Wi-Fi connectivity delivered an enhanced experience for all passengers with economy and comfort class users enjoying increased legroom and seat pitch.

The European-built widebody jet also arrived with a fresh look on the outside as well as the cabin improvements in the interior. A revised livery featured an expanded Russian tricolour on the keel beam, with an unfurled flag also adorning the wingtips. The underside of the fuselage was also painted silver rather than dark blue, and bears the name of the airline.

At the time of first delivery, before COVID-19 struck, Aeroflot had planned to take delivery of 11 A350s by the end of 2020, but the airline currently has just six of them according to the CAPA – Centre for Aviation Fleet Database with 16 more on order. It also revealed plans to reduce the quality gap between the A350 and 777 fleets with a retrofit programme for the older type.

This month, has provided evidence of the changes with Aeroflot unveiling the first retrofitted 777-300ER and the arrival of a suite experience with the introduction of the Super Diamond NG seat from Collins Aerospace into the business class cabin.

The 777 in question, one of the airline’s most recent deliveries, has 427 seats and alongside 28 of the business class seats features accommodation for 24 passengers in comfort class and 375 in economy. This is a slightly denser configuration than standard for the airline on the type with a switch of some premium economy to economy seating.

The business class seat features sliding doors and an extra armrest which turn it into a private suite fitted with an 18.5-inch HD monitor and 2-metre full-flat bed as offered on the A350. The seat pitch in Economy class averages 80cm, while in comfort class it is 96cm.

Aeroflot says it will operate the retrofitted 777 on “all popular international and domestic routes,” including its flights to Dubai, New York, Los-Angeles, Mahe, Delhi, Yerevan, Bishkek, Baku, Tashkent, Khabarovsk, Vladivostok, Petropavlovsk-Kamchatsky. However, over the past week it has solely been deployed on the Moscow – Khabarovsk domestic route.

The retrofit represents a significant improvement for passengers flying onboard Aeroflot’s 777s and is important for the carrier delivering some form of standardised – albeit not unified – offer to corporates, but with just one aircraft currently completed, customers may feel even more underwhelmed if they are still forced to fly on aircraft fitted with the older design.