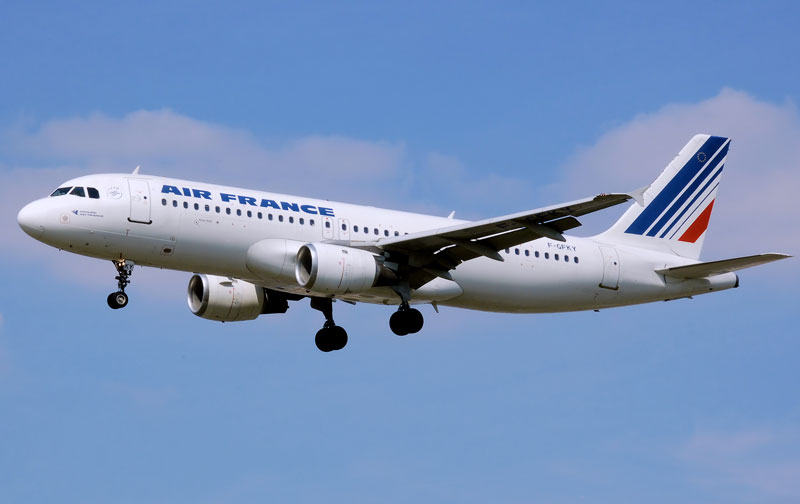 Air France-KLM has reported an operating loss of EUR353 million for 2011, a significant turnaround from its 2010 profit of EUR28 million - and follows Lufthansa's 18% year-on-year decline in operating profit to EUR820 million last year. This has been a difficult year for the Franco-Dutch airline group, as it battled rising fuel prices and uncertainty across many of its markets. The start of 2012 saw the Group launch ‘Transform 15’, its turnaround programme aimed at restoring profitability. The 2011 loss emphasises the need for this programme to deliver results, given a continuing uncertain outlook as Europe's economic troubles persist amid high fuel prices.

Air France-KLM passenger traffic increased 6.9% year-on-year accompanied by a 6.6% rise in capacity and consequent passenger load factor increase of 0.3 ppt, to 82%. The cargo side of the business declined 1.2% while capacity increased 2.4%, resulting in a decrease in average cargo load factor of 2.4 ppts, to 66.4%. The results are influenced somewhat by the volcanic disruption of 2010 which caused a decline in earnings over a period in 2Q2010. 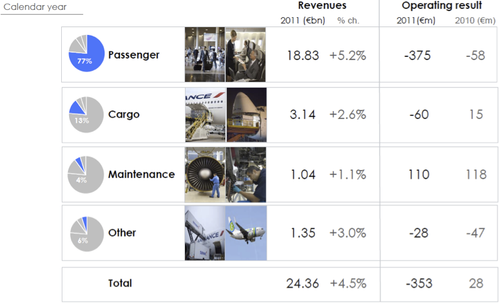 Despite the result, the Group retains a high level of liquidity at EUR2.9 billion cash as at 31-Dec-2011. This increased by a further EUR467 million from the Group’s partial sale of Amadeus in Feb-2012.

The Group has already taken steps towards implementing the plan, including revising down capacity growth from 4.7% in 2011 to 1-2% annually until 2015. 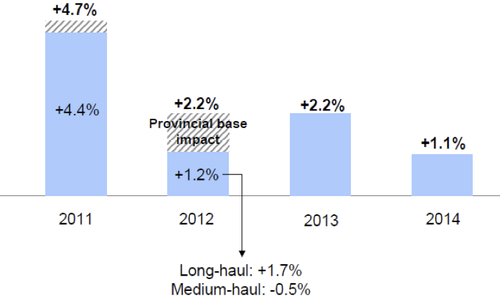 The reduced capacity increases flow through to decreases in investments, particularly on the Group’s fleet. The Group spent EUR1.2 billion on fleet activities in 2011, however this will be limited to a maximum of EUR700 million in 2012, EUR600 million in 2013 and EUR300 million in 2014.

The Group has also already introduced a freeze on salary increases at Air France and “wage moderation” at KLM, moves expected to generate more than EUR1 billion in savings over the next three years. They will however not be popular with staff and unions.

Transform 2015’s first phase is to end at the end of Mar-2012 following the Group reaching an agreement with employee unions to define working methods and productivity improvements, as well as measures to achieve these improvements. The Group aims to sign new collective agreements with staff by the end of Jun-2012 and the combination of these developments is expected to generate a 20% improvement in economic efficiency in 2014 in comparison to 2011.

The second phase of Transform 15 will involve returning its medium-haul operations to break-even and turning around its cargo business. Profitability improvements are to be made on the Group’s long-haul network, achieved through closures of particular routes and repositioning of specific in-flight product, according to the route. Maintenance operations are also to be improved through subcontracting “certain airframe activities”.

Short-haul changes in south of France

Air France’s ‘commercial offensive’ is set to continue in the south of France, where it is adapting its product to better compete with the growing low-cost carriers in the market. Having launched the strategy in Marseille in Oct-2011, Air France plans to implement the strategy in Nice and Toulouse in Apr-2012. Bordeaux is set to follow later in 2012.

Investment in product, while fleet expansion is reined in

Aside from the transformation programme, Air France-KLM is attempting to strengthen its operations through continual investment into its product and making its hubs more attractive to travellers. The airline is also looking to deepen its alliances in order to strengthen its position in key markets.

Air France-KLM views 2012 as yet another difficult year in prospect, not solely due to the Group’s new transformation plan, but because of continued market uncertainty in Europe and volatile fuel prices.

The Group expects its fuel expenses to rise by EUR1.1 billion in 2012. After 2011’s natural disaster in Japan – an important high yield market for Air France in particular - there followed economic crises in Europe and political instability in North Africa and the Middle East. The political situation remains volatile in some important markets for the Group. On 07-Mar-2012 Air France announced the indefinite suspension of Paris CDG-Damascus service due to the increasing violence in Syria.

The Group warned its 1H2012 results will be lower than 1H2011 however 2H2012 should show some positive effects from the first steps taken in the ‘Transform 2015’ programme. The Group will continue to work towards reducing its debt in 2012, with the aim to have a maximum debt of EUR6.5 billion by the end of the year.

Much will depend on union and staff take-up of the planned cost reduction plans. Indications to date are that this cannot be taken for granted.