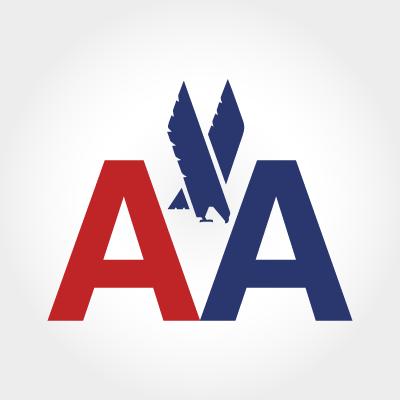 American Airlines is continuing a months-long trend of recording revenue strength relative to its peers, but its unit revenue performance during 3Q2012 diminished year-over-year as its net losses widened due to reorganisation costs. The company is incurring the losses as it works to regain consumer confidence after a wave of cancellations and delays during the last few weeks ushered in by labour unrest.

Even as American’s revenue performance continues to be strong, year-over-year performance for all carriers is starting to slow, and there are some slight signs that business demand could be softening as the US presidential election and general economic uncertainty make some businesses skittish about investing in non-essential corporate travel.

American’s parent company AMR widened its net loss year-over-year during 3Q2012 to USD238 million from a USD162 million loss during the year prior.

The loss was driven by Chapter 11 reorganisation costs, the company stated, and excluding those expenses AMR’s 3Q2012 net profit was USD110 million.

AMR’s revenue during 3Q2012 remained essentially flat year-over-year at USD6.4 billion as expenses notched up to USD6.4 billion versus USD6.3 billion for the year prior. The company improved its operating income by USD12 million to USD51 million during 3Q2012, and reversed a USD270 million operating loss recorded during the first nine months of 2011 to USD104 million in operating income for the same time period in 2012.

American recorded a 3.8% rise in its operating expense during 3Q2012 largely as a result of a USD211 million charge incurred for severance packages associated with its previously-stated plans to reduce its labour force.

Favourable fuel hedges reduced the price per gallon American paid for fuel during the quarter to USD3.12 from a cost of USD3.15, which resulted in the carrier paying USD22 million less than it would have paid the year prior (3Q2011) at prevailing prices during that time.

The company’s Chapter 11 reorganisation, which began in Nov-2011, resulted in certain reduced expense line items including a reduction in aircraft rental expense and landing fees, which helped to contain its rise in total operating expenses during 3Q2011 to just 0.7%. During the same timeframe in 2011 just prior to its declaration of Chapter 11, American’s expenses jumped 15% to USD6.4 billion.

On a geographical basis, American improved unit revenue and yields across all of its entities, with the strongest performance in its Pacific markets where unit revenue grew nearly 16% and yields increased 10.4% on a 5.7% fall in capacity year-over-year during 3Q2012. During 3Q2011, American’s Pacific unit revenues fell 7.5% while yields declined 4.4% on capacity growth of nearly 22%.

The improved performance in the carrier’s Pacific revenues was likely driven by a capacity pull-down year-over-year in those markets and a full recovery in traffic in Japanese markets following the Mar-2011 earthquake and tsunami that struck Japan, which weakened demand in those markets for much of 2011.

American is also seeing some benefit from the full implementation of its trans-Pacific immunised joint venture agreement with oneworld partner Japan Airlines that was inaugurated shortly after the natural disaster that struck Japan in 2011. American also cited increased revenues from Asia point of sale that helped to drive its strong Pacific performance during 3Q2012.

After seeing weak results in its Pacific markets at year-end 2011 and the beginning of 2012, United also saw a rebound in that region’s performance during 2Q2012, as unit revenues during that time grew 7% and yields increase 5%. Japan was the top performer in United’s Pacific network during 2Q2012.

With the exception of Latin America, which recorded capacity growth of 1.8% in 3Q2012, capacity fell in the rest of American’s geographic entities. American’s unit revenues in Latin America increased 4% during 3Q2012 while yields grew 2.5% compared with 8.5% unit revenue growth and a yield increase of 15% during the same period in 2011.

In the US domestic market, American recorded 3.8% unit revenue growth and a 4% rise in yields on a 3.3% drop in capacity compared with 7.7% growth in unit revenues during 3Q2011 and a yield increase of 6.7%. 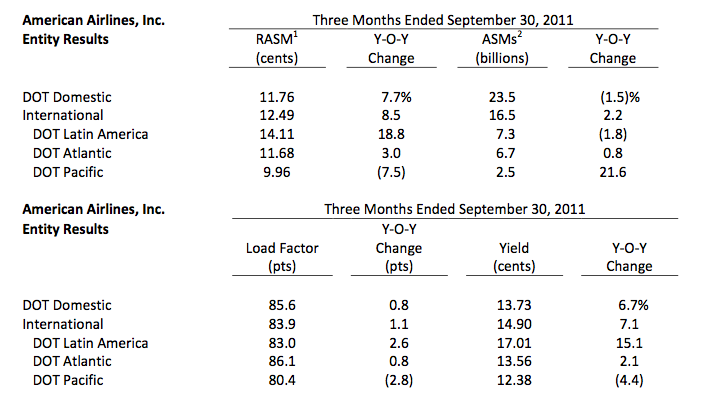 American stated that it recorded unit revenue increases during 3Q2012 across all five of its US hubs – Dallas, Chicago, Miami, New York and Los Angeles – which help to drive growth in yields on connecting revenue. American also cited a rise in premium cabin load factors during the three months ending 30-Sep-2012.

But American’s mainline unit revenue during 3Q2012 fell 3.5ppt year-over-year, and the 4.5% growth during the quarter that features the high season for US travel was the smallest growth the carrier recorded in quarterly unit revenue for 2012. The US major carriers have warned that revenue growth during the back-half of 2012 would create difficult year-over-year comparisons as the industry’s revenue performance was particularly strong during the comparable period in 2011. US airlines during 3Q2011 also enjoyed a break from certain ticket taxes collected by the US FAA as a Congressional stalemate triggered a temporary shutdown of the agency’s administrative functions.

American’s positive demand and revenue commentary parallels sentiments recently expressed by its US mainline legacy carrier counterparts that demand should remain relatively stable for the remainder of 2012. However, Delta’s Sep-2012 unit revenue growth of 0.5% was lower than the 1%-3% growth projected by the carrier driven by slightly lower walk-up traffic and some incremental capacity growth due to stronger completion factors. Delta had issued prior warnings that Sep-2012’s performance could be affected by volatility in last-minute bookings, which seemed to occur and put pressure on the carrier’s monthly results.

See related article: US majors including United and Delta cite sustained demand as 3Q2012 comes to a close

Passenger demand is projected to remain stable for 2H2012

Overall Delta and US Airways believe that demand should remain stable during 3Q2012 and 4Q2012. US Airways assumed that view even as it remarked that business demand was slightly softening. United has already made proactive capacity cuts after concluding some “moderate slowness” exists in its economic outlook. The carrier now expects its capacity to decrease 2%-3% for Sep-2012 to Dec-2012 compared with an original projection of 0.5% growth to a fall of 0.5%.

With Delta seeing some flux in walk-up demand and US Airways citing a bit of softness in corporate demand, 4Q2012 could prove to be choppy for US airlines if the year-end holiday season proves to be weaker than expected. But for the moment those carriers remain confident that the supply-demand balance in the market-place is favourable as Delta expects revenues across all its regional entities during 3Q2012 to remain solid and US Airways believes leisure traffic is holding steady throughout the remainder of the year.

But a certain degree of uncertainty is underpinning those assumptions driven by shaky global macroeconomic conditions. The capacity discipline and cost containment that US carriers profess will help them weather economic uncertainty could be put to the test if the recent softness in some sectors continues to permeate the otherwise solid demand environment. 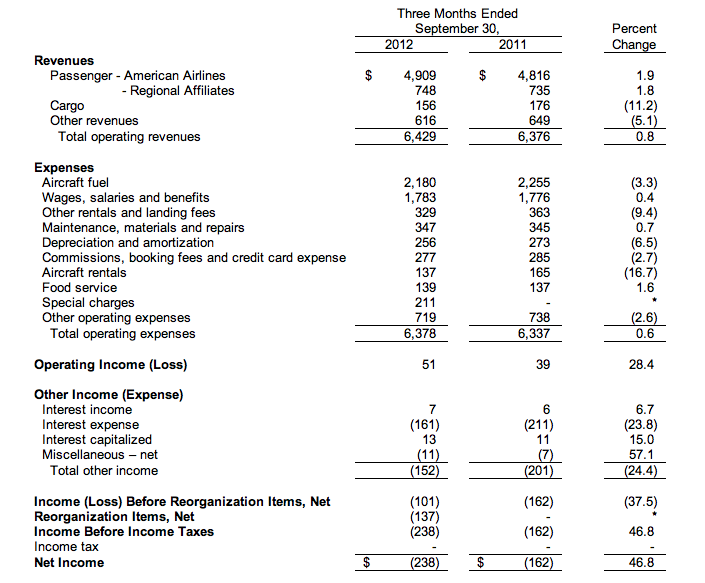 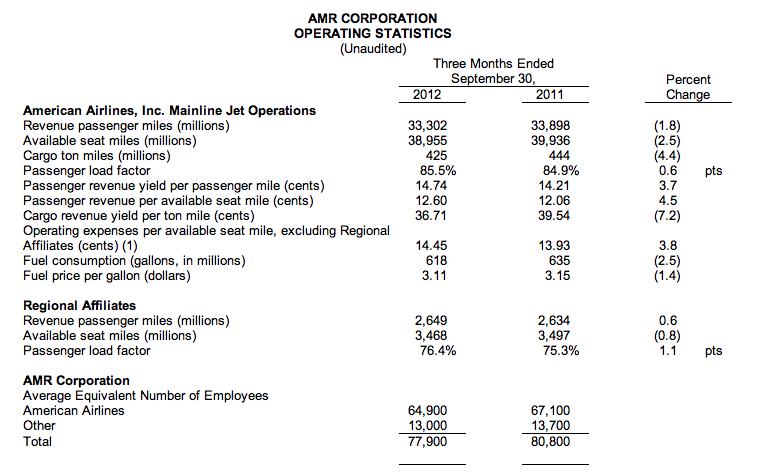