Cathay Pacific profit falls, but from a record level as it manages very well in a tough environment

Cathay Pacific’s financials in 2011 were never going to compare well to a fantastic 2010. Headline revenue were up 9.9%, but net profits fell 60.8% and profit margin dived 10.1 ppts to 5.6% from the previous year’s record 15.7%. Cathay cited the the instability of the global economy, the weakness of the air cargo market, the reduction of yields in economy class, the impact of natural disasters in Japan and Thailand, unrest in the Middle East and continued high jet fuel prices for the result – and predicted tougher times in 2012.

But in the circumstances, and relative to its peers, Cathay is performing well and is an extremely well managed airline. Over the past three years, management has reduced unit costs per ATK by 9.2%. Singapore Airlines has seen a 0.5% increase over the same period. 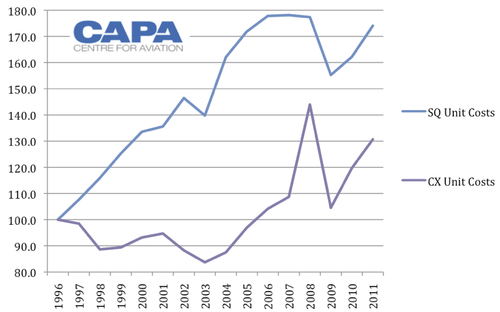 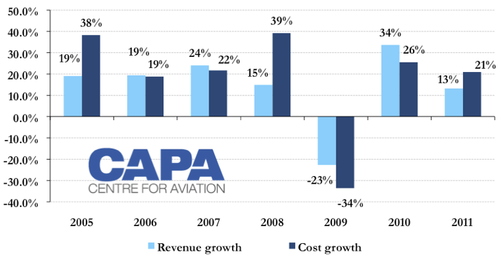 Cathay’s top line was boosted by an 8.7% increase in passenger yield last year, driven by strong yield growth in North Asian markets, taking its yields to levels some 4.7% above pre-global financial crisis levels. North America saw the least growth in yields – but still growth. Singapore Airlines’ yields in the nine months to 31-Dec-2011 were flat – and remain almost 5% below GFC peaks. 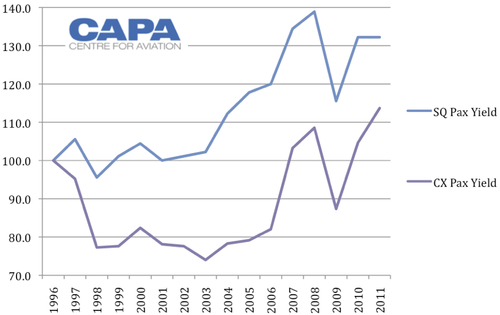 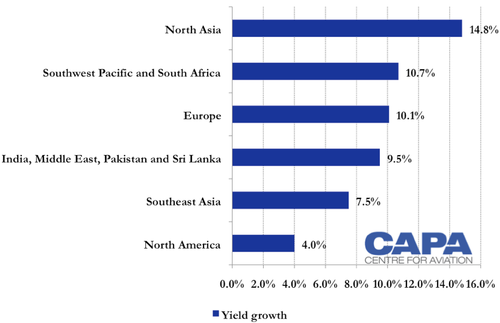 Cathay also enjoyed a 3.9% increase in cargo yield last year, despite tough trading conditions, due to careful capacity management. Singapore Airlines’ cargo yields meanwhile fell 3.9% and remain almost 9% below previous peaks in 2006. (Cathay’s cargo yields are some 4.7% below the 2008 peak.) 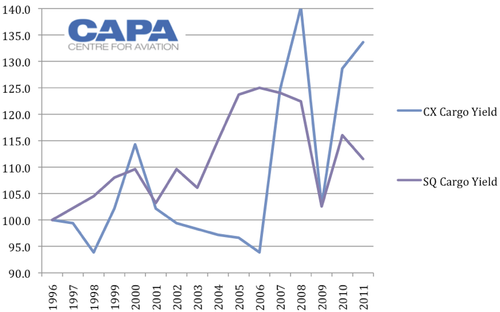 Cathay’s outperformance has come even as it has more than doubled in size, while Singapore Airlines has seen modest growth but has lost on many growth opportunities, a situation it hopes to reverse with the founding of its LCC Scoot. 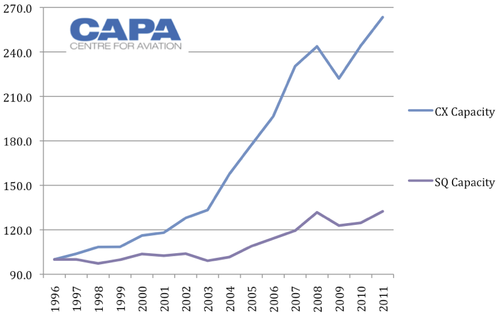 Despite the expected decline in profitability, Cathay Pacific, Hong Kong’s home carrier and Asia’s largest international carrier, remained generally robust following the very strong performance of 2010, which saw the carrier report its best-ever annual profit of HKD14.05 billion (USD1.8 billion), with this result providing a boost to the carrier’s balance sheet. This strong balance sheet is supporting new fleet additions and an array of product improvements as the carrier seeks to cement its position in the premium market amid increasing competition from its peers and the planned ascendance of Hong Kong Airlines into the international market.

Despite the 61% decline in profits to HKD5,501 million (USD710 million) amid a 44% increase in fuel costs, slower demand and one-off gains in 2010, Cathay Pacific remains in a strong position financially and structurally. Its net profit result was the third strongest in the past decade (the second, in 2009 was slightly below 2011), although its margins are not as strong compared to other years over the past decade. One of the largest carriers in the world, handling 27.6 million international passengers in 2011, Cathay Pacific also remains one of the 10 largest carriers by market capitalisation and is in the enviable position on the doorstep of China, with a 19% ownership stake in Air China and also owns mainland China-focused Hong Kong Dragon Airlines, which operates as an effective vessel for mainland services. 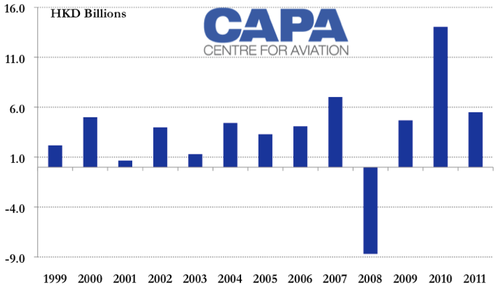 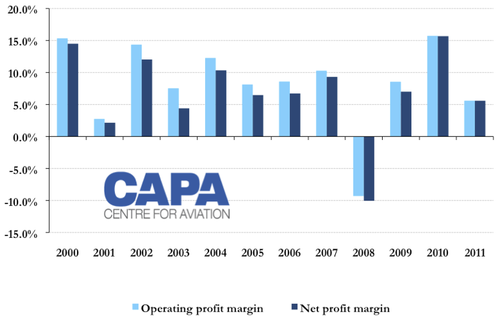 However, Cathay Pacific is not immune to the current challenges in the aviation sector, describing 2011 as a “normal” year for the airline industry following stellar growth of 2010. The situation is expected to become more pressured in 2012, with chairman Christopher Pratt commenting that “2012 is looking even more challenging than 2011”.

Like its peers across the globe, Cathay Pacific has noted the “major challenges” of high fuel prices and economic uncertainty – which are having a negative impact on economy class yields and its cargo business – are the latest reminders that the carrier operates in a challenging and unpredictable industry. "The concern for this year would be weakening revenue, but still very high oil prices. I mean the oil market is the one that I understand the least, because when you see the slowdown in economic activity that we're starting to see, you'd expect oil prices to be declining, but frankly they've been very sticky," Cathay Pacific CEO John Slosar has said previously.

Enviable position in the mainland Market

Cathay Pacific CEO John Slosar has previously stated the carrier expects double-digit growth to continue in its mainland business, which currently contributes around 10% of the company's turnover, an increase from 5% three years ago.

Business derived from mainland China continued to increase in importance in 2011 and will continue to do in the years ahead. Revenue growth benefited from strong demand for premium class travel on short-haul routes while demand for travel on routes to secondary cities was also strong. Dragonair is continuing to increase capacity on its Chinese operations accordingly, increasing targeting high-potential second tier markets as competition on first tier routes feels the impact from rising competition. Dragonair has announced it will resume service to Xi'an and Guilin while increasing frequency to Ningbo and Qingdao as part of a fleet increase of six additional aircraft: 4 A320s and 2 A330s.

Freight: an area for concern but improvements on the horizon

Cargo revenue increased by only 0.3% in 2011 to HKD25,980 million, driven by a stronger performance in 1Q2011. However, the carrier witnessed cargo demand weaken from its two most important markets, Hong Kong and Mainland China, from Apr-2011 onwards, with weakness continuing into the current year.

Cathay Pacific, the world’s largest international cargo carrier, reported an 8.6% year-on-year slump in cargo volumes, which accounts for around 30% of revenue, in 2011 to 1.6 million tonnes, although the carrier successfully managed capacity in order to keep it in line with demand. As a result, cargo yields improved 3.9% to HKD2.42 although freight load factors weakened 8.5 ppts to 67.2%. Cathay Pacific COO Ivan Chu Kwok-leung at the end of Feb-2012 stated the carrier expects its cargo business will pick up in 2H2012. The next few months, however, will be challenging, with no sign of improvement amid challenged global economies. 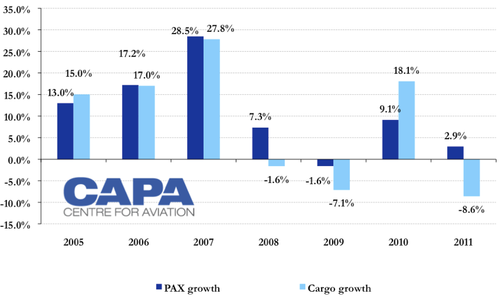 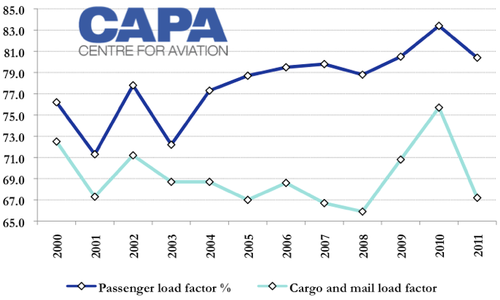 While cutting back on capacity to European and North America markets, Cathay Pacific Cargo is expanding in other markets. As part of this, the carrier is reportedly considering establishing two new freighter bases in Ahmedabad and Hyderabad in 2012. The company already operates in Delhi, Mumbai, Chennai and Bangalore. "We are studying the potential of these markets [Ahmedabad and Hyderabad] from both an import and export point of view. In 2012, we should be online in more ports than we are right now," said Cathay's regional cargo manager South Asia, West Asia and Africa, Ashish Kapur.

The long-term freight outlook is however more positive, as the carrier benefits from its hub in Hong Kong and again, its location to mainland China. One of the major developments for Cathay Pacific in 2011 was the launch of a cargo JV with Air China in May-2011, in which it holds equity and an economic interest. The JV operates from Shanghai under the Air China Cargo name and captures airfreight opportunities from the Yangtze River Delta region. Shipments of air cargo from the Yangtze River Delta region account for two-thirds of mainland China’s air cargo business. Additionally, with a new cargo terminal scheduled to commence operations in early 2013 and 14 freighter aicraft on order, the carrier is well-positioned to benefit from long-term growth prospects in the cargo business in the years ahead.

Firmly focussed on the premium market

Despite the current economic challenges and an increased focus on cost control, Cathay Pacific is maintaining its focus on the premium end of the market, with the introduction of new business and premium economy class seat. At the end of 2011, the new business class seats have been installed in 15 aircraft, with the carrier commencing the installation of new premium economy class cabins on its long-haul aircraft last month. The new cabins are expected to be installed in 87 aircraft by 2013. Cathay Pacific CEO John Slosar, in the Feb-2012 edition of CXWorld, stated he is "confident" the carrier's new premium economy product will make a "big impact" on the market.  Meanwhile, as market sentiment improves, Cathay will benefit from this as it has a big exposure to corporate fliers.” Cathay has also introduced a new long-haul economy seat, replacing its unpopular fixed-back-shell seat.

In 2010, Cathay was able to get its business back on track, with capacity being restored, an improved financial situation and a strengthening of the carrier’s balance sheet. In 2011, profitability has weakened, although yields and revenues continue to grow, benefiting from the continuing low level of the Hong Kong dollar, which is linked to the Chinese yuan. While the carrier continues to feel the impact of high fuel costs, its lower cost base delivers it a significant strength. Cathay Pacific is also benefiting from its high exposure to the Chinese market, with the carrier believing mainland China is the "growth story of the decade". Cathay and Dragonair are in the prime position to benefit through their network cooperation with Air China.

2012 will be another challenging year for the global aviation industry and Cathay Pacific, although with a careful focus on cost control and targeted growth, which will see capacity increase by 7-10% in 2012, is poised to benefit from improved conditions. 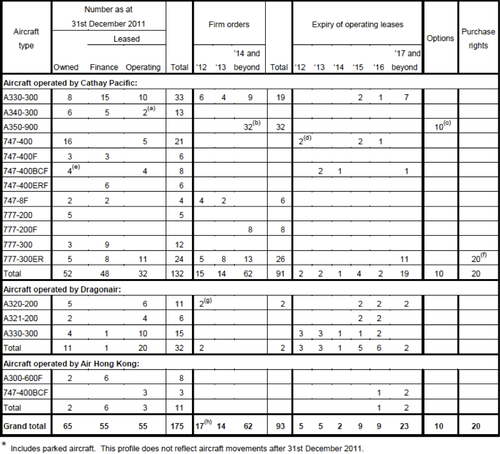