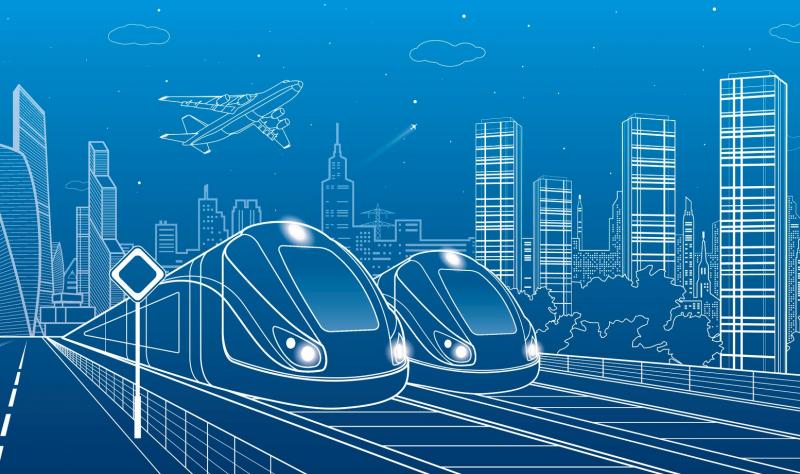 Travel plays a huge role in the carbon footprint of any business, but until the COVID-19 pandemic sustainability was not necessarily a massive consideration when planning business trips. Employers and employees alike understood calls for offsetting emissions of travel, but a lack of transparency in environmental programmes meant there was a big disconnect between wanting to travel responsibly and actually doing that.

Over the past couple of years sustainability has certainly climbed much higher up the business travel agenda and more widely introduced into travel policy. It has become obvious that to make green business travel a reality, companies need to evaluate their current impact and tackle it head-on. There are various ways this is being achieved from streamlining carbon emission reporting, following socially responsible carbo offsetting or crafting a sustainability culture.

One popular view is travel substitution and moving from one form of travel to a more environmentally responsible alternative. For short-haul travel, many studies highlight how rail can be a much better alternative to air travel. In fact, according to studies by the European Environment Agency (EEA), travel by rail emits less than 1/20th of air travel emissions and 1/7th of those from driving. However, modal shift from air to rail may not deliver the such environmental benefits.

Modal shift from air to rail has been encouraged

The modal shift from air to rail has already been encouraged both through massive investment in rail infrastructure and by bans and taxes on short-haul flights in certain countries, with potentially more to follow as governments increasingly look at ways to meet national emissions targets.

In general, literature shows that air transport has higher CO2 emissions than rail per passenger-kilometre in most circumstances, but estimates vary as to the scale of this difference. The European Federation for Transport and Environment finds that, on average, air travel within Europe emits five to six times more CO2 per passenger-kilometre than travel by train.

The aforementioned EEA study estimates the total cost of pollution from different modes of transport in the EU. It finds that total environmental costs, which account for air pollution, climate change impacts, lifecycle CO2 emissions and noise, are substantially higher for air (EUR32.7 billion) than for rail passenger transport (EUR7.8 billion).

However, a new study commissioned by European aviation associations and carried out by economics and finance consultancy Oxera, confirms that the extent to which rail travel can substitute for air travel is actually limited with other literature failing to take account of all of the factors that require consideration when comparing the environmental impact of air and rail.

The report, ‘Short-haul flying and sustainable connectivity’, highlights the fact that the picture is far more complex than simply shifting from one transport mode to another. Building new railway lines has a high environmental cost due to the CO2 emissions associated with cement and steel production, and emissions from the fuel used for construction of infrastructure, it notes. The study also identifies significant impact on biodiversity and damage to wildlife habitats as additional environmental factors.

Rail ‘cannot be economically viable’ across many short-haul air routes

For many short-haul air routes with a lower traffic frequency, or at airports without a good high-speed rail connection, the report says rail “cannot be economically viable as it is based on a different business model with lower occupancy and speed rates”. Moreover, it says, there is “no guarantee” that passengers will switch from air to rail, choosing perhaps to travel by car instead, which could actually “lead to higher CO2 emissions”.

Importantly, the report acknowledges that aviation decarbonisation will be well underway by the time comparable rail infrastructure is deployed. Hybrid-electric aircraft will be likely trialled first on regional routes by 2030, bringing CO2 emissions down by 50 per cent per flight in that market segment.

Therefore, as both the rail and aviation sectors decarbonise, the gap between air and rail CO2 emissions will be further reduced. In addition, as the routes most likely to decarbonise first, short-haul flights within Europe will play a significant role in rolling out lower carbon disruptive technologies first thereby accelerating wider decarbonisation roll-out, according to the report.

Figure 1: It is suggested that any investment in a modal shift towards rail is likely to lead to lower future returns in terms of carbon payback 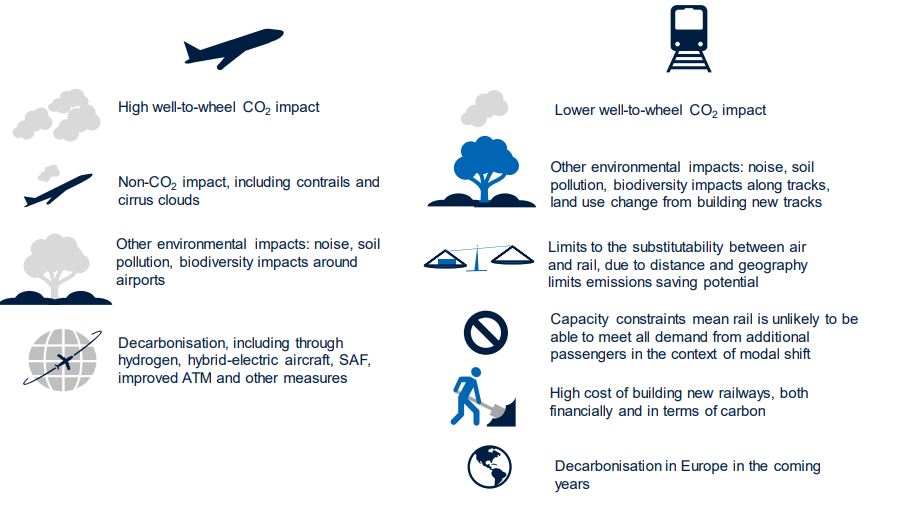