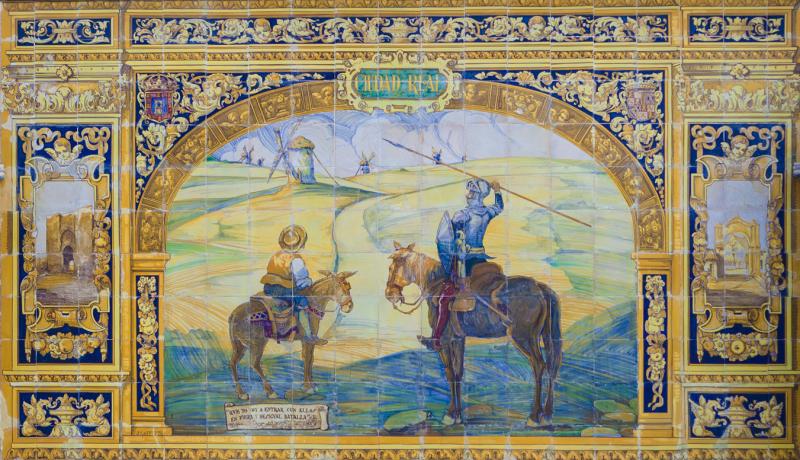 If there is one example anywhere in the world of an airport that should never have been built – a textbook case study that should feature in university transport courses’ curricula - it is Ciudad Real Central Airport. Variously known also as Don Quijote Airport and South Madrid Airport it was a public-private sector joint venture that was mired in controversy right from the start, later caught up in allegations of fraudulent activity, and ultimately most of the investors lost heavily on it.

The saddest thing is that it was based on a premise that had merit when the airport was conceived but which was out of date by the time the much-delayed construction began. Having acquired the sobriquet ‘aeromuerto’ and mothballed for several years now, it seems though that it might be in for a reprieve.

When the Ciudad Real project was conceived, in the mid-2000s, what is now called Adolfo Suárez Madrid Barajas Airport was bursting at the seams. Ciudad Real is situated some 200 km (125 miles) south of Madrid, which even puts it beyond the outer limits for a Ryanair pseudo-city airport. It is also in what is one of Spain’s least populated autonomous regions, Castille-La Mancha. At 26.7 people per square kilometre is the second least thinly populated after neighbouring Extremadura, whose own primary airport, Badajoz, is another aeromuerto, with just 33,000 passengers in 2016.

MAP - Ciudad Real is a city in Castile–La Mancha, Spain and is located approximately 115 miles south of the capital, Madrid

However, the advent of the AVE high-speed rail network was to be the raison d’être of the airport, as Ciudad Real would lie on the route of the Madrid – Sevilla/Málaga line with the airport having its own station close by. It could be directly accessible from Madrid in under an hour. The proximity of an east-west motorway that was under construction between Valencia and Lisbon would also add to its appeal.

But the completion of Terminal 4, one of the world’s largest, at Barajas in 2006 along with two new runways, the associated freeing up of capacity at other terminals and a revision of tariffs by AENA meant that the nascent demand from LCCs for an alternative Madrid airport (it is one of few capital cities of large countries in Europe not to have one) disappeared overnight.

When it opened in 2008 (further delayed by the need to get environmental clearance, which took an age), and at a cost of over EUR1 billion, Ciudad Real was able to attract, and for a short time retain, services operated by Air Berlin (to and via its Palma de Mallorca hub), Air Nostrum, and Vueling, which was the last scheduled passenger airline to withdraw, in Oct-2011.

Ryanair did operate a London Stansted route for a while but it never set up a base and committed aircraft there because it no longer needed to. That more than anything had been the premise on which Ciudad Real’s construction was based. Ryanair departed after just six months of operations once it was clear that there was no promise of successful additional routes and substantial profitability. easyJet, another potential user at Ciudad Real, also established a large base at Madrid.

Vueling’s parting shot had been of a similar nature. It left because of “low profitability of the routes” but added “increased cost of aviation fuel and the stagnation of the Spanish economy”. That’s something else the Ciudad Real team couldn’t get right. It managed to open just as Lehman Brothers went down the pan, sparking the global financial crisis. Spain subsequently suffered over seven years of recession, probably the second-worst in Europe after Greece’s.

The writing was on the wall already when the airport “celebrated” its first birthday in Dec-2009 with just 53,000 passengers under its belt (on 3,802 movements, an average load factor of 14). This being an airport that was conceived as being able to handle up to 10 million passengers a year.

CHART - What Ciudad Real missed out on – Madrid Barajas’ passenger traffic loss, and growth, from 2009 to 2017. Almost all of that growth came from two years after Ciudad Real closed to passenger services

After the passenger services had departed attempts were made to promote the airport as a logistics hub, with cargo aircraft feeding road haulage services across the Iberian Peninsula. But it was too isolated even for that. Fundamentally, Ciudad Real is central to nowhere in particular.

As for the much-vaunted AVE, that had a beneficial effect on Ciudad Real but only in the sense that, rather than bringing passengers to the airport, it turned the town into a commuter suburb for Madrid.

There then followed a lengthy and at times farcical auction/sales procedure which on one occasion had the airport changing hands for EUR10,000 to a Chinese company before a judge put a stop to the transaction. Eventually it made its way into the hands of the current owners, essentially “a group of engineers with relevant entrepreneurial experience” as they describe themselves. They set about the task of making the airport operationally ready before the end of 2017.

The Spanish economy is doing rather better now. The country has been out of recession all year and 3Q2017 GDP growth reached an impressive 0.8%.

So, ironically as the earliest airline to use the airport – airberlin – passes into history, Ciudad Real Central gets a third lease of life, and possibly doing what it should have been doing in the first place.