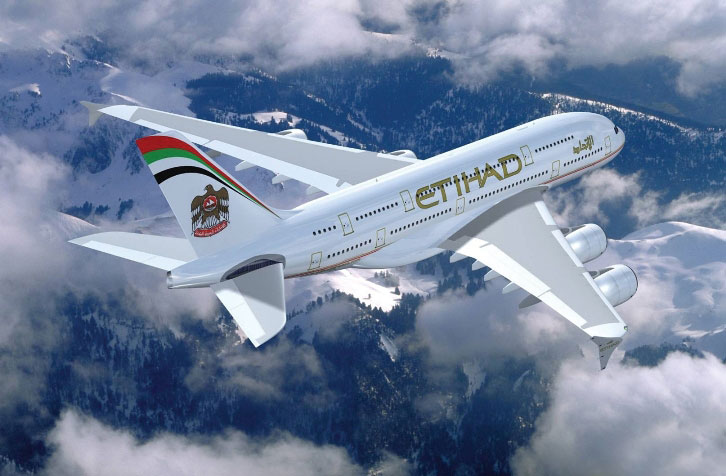 The increase corresponds to a 27.4% surge in passenger traffic in the quarter, up by just over half a million passengers, indicating Etihad is growing revenue very slightly ahead of capacity growth. Etihad Airways added new services to Tripoli, Shanghai and Nairobi during the quarter, with passenger numbers reaching 2,360,000. 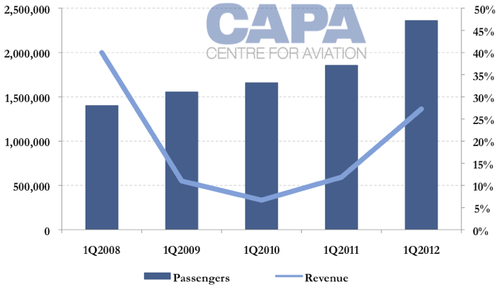 Revenue passenger kilometres (RPKs) rose 26.6% to 10.9 billion for the quarter. The carrier did not report its increase in capacity – available seat kilometres (ASKs) – but load factors improved to 76.5%, up 3.8 percentage points on 1Q2011, indicating that demand growth is stronger than the carrier’s capacity expansion. The passenger load factor figure is the highest first quarter level in the airline’s history.

Etihad added four new aircraft in the quarter, taking its fleet to 67. Altogether, Etihad will take delivery of seven new aircraft in 2012 – three Airbus A320s and four Boeing 777s. Its first three-class B777-300ER will be deployed on the London route from Jul-2012. The carrier’s fleet will reach 71 aircraft by the end of 2012.

Freight revenue growth was not as strong as passenger revenue, rising 12.2% year-on-year to USD142 million. Despite the overall downturn in international freight traffic, Etihad reported that cargo volumes had been strong, load factors increased and it continued to adjust freighter flying to meet customer needs.

The freight growth was despite IATA reporting that global average freight tonne kilometres have been declining since early 2012, although there were signs late last year that the reduction of freight volumes was levelling out as world trade is starting to expand again.

Etihad has capitalised on more freighter flights into Central Asia and Libya early in the year and made better use of the bellyhold capacity on newer passenger routes, such as Düsseldorf, Shanghai, Chengdu and Tripoli.

Codeshare partnerships are playing a major role in the airline’s growth, accounting for 18% of the carrier’s revenues in the quarter, or almost USD180 million.

1Q2012 saw another round of significant expansion of Etihad’s strategic partnership strategy, with the carrier taking a 40% ownership stake in the troubled Air Seychelles. It bought into the carrier for the bargain price of USD20 million, plus a USD25 million shareholder's loan. Etihad and Air Seychelles have already announced an expansion in connectivity between the Seychelles and Abu Dhabi, and Etihad will leverage the Seychelles as a stepping stone into Africa.

Also set to enhance Etihad’s bottom line is a new agreement with airberlin over orders for the Boeing 787. The two airlines will integrate their 787 programmes, affecting a total of 56 firm aircraft to achieve synergies in the undisclosed millions of dollars for both carriers. A combined Etihad Airways-airberlin team, led by Etihad Airways, will oversee the integration programme, which will see the two airlines share infrastructure, pool maintenance, develop joint training programs, and streamline purchasing activities, as well as work jointly on product development for the new aircraft type.

The move came just days after Etihad Airways announced it was buying 10 more 787-9s, taking its total order to 41, with 25 options and purchasing rights. In Dec-2011 Etihad Airways increased its stake in airberlin to 29.21%, making it the single largest shareholder in Europe’s sixth largest airline. airberlin and Etihad have also announced plans to add more capacity between Germany and Abu Dhabi.

During 2012, the carrier will also increase frequencies to Dusseldorf and London in Europe, Bangkok and Kuala Lumpur in southeast Asia and Cairo, Kuwait and Dammam in the Middle East. Etihad Airways also plans to introduce additional frequencies to a range of other destinations in Asia and Australia.

Yields and fuel the lingering concerns

Despite the record passenger numbers, load factor and revenue, Etihad said yields, “remain a challenge” particularly in premium cabins. Passenger revenue for the quarter was USD763 million, giving a figure of USD323.31 per passenger for the period. This is down slightly from the 1Q2011 figure of USD328.65 per passenger.

Fuel prices are a major concern, although Etihad has committed itself to an active fuel hedging strategy. 80% of 1Q2012 fuel costs were hedged and the carrier has 74% of fuel costs hedged for the rest of 2012. In Mar-2012, Etihad Airways increased the fuel surcharge on its European flights to offset the costs being imposed on the airline by the EU Emissions Trading Scheme (ETS).

Mr Hogan stated the carrier met all its revenue targets and budget estimates for the quarter despite the “challenging economic conditions confronting the international community”. Mr Hogan pegged future success on the carrier’s growth combined with its codeshare partnerships and strategic equity investments, unique for a Middle Eastern network carrier.

Etihad Airways reported its first full year net profit in 2011, a modest result of USD14 million. It expects to improve on that performance in 2012, while targeting a goal of ten million passengers for the year.