How do you oversee a widebody fleet of 270 aircraft during a global pandemic? An insight into Emirates’ parking and reactivation programme 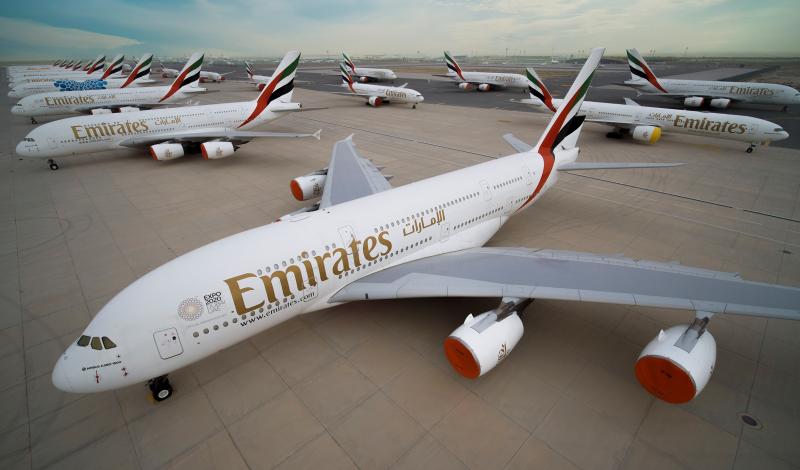 From airport runways and taxiways to specialist storage locations there are approaching 20,000 inactive aircraft currently, according to data from the CAPA – Centre for Aviation Fleet Database. In fact, there are more aircraft now listed as inactive than in-service based on its 03-May-2020 update of the database.

While countries across Europe may now be attending to ease restrictions air travel still remains limited to a skeletal operation. It currently dominates the inactive fleet listing with almost seven in ten aircraft listed as inactive. The Middle East follows closely behind with just under two in three aircraft inactive, dominated by the large fleets of the likes of Emirates Airline and Etihad Airways that are currently stuck on the ground.

It is difficult to get a firm count on the number of aircraft currently parked as airlines that are offering some services currently are regularly rotating aircraft in order to keep their fleet active. There are numerous factors that need to be incorporated when it comes to taking aircraft out of service for any notable period.

CHART – More aircraft are now listed as inactive than in service with figures closing on the 20,000 figure

Take for example Emirates Airline, one of the national carriers of the United Arab Emirates (UAE), which is currently protecting and readying its all wide-body fleet to take back to the skies in the coming months. The airline has what it describes as a comprehensive aircraft parking and reactivation programme that strictly follows manufacturers’ guidelines and maintenance manuals, and enhanced standards and protocols of our own.

“We don’t just cover our engines,” says Ahmed Safa, divisional senior vice president engineering at the airline. “We have the enviable challenge of a full wide-body fleet – 115 A380s and 155 B777s – and the most sophisticated systems and avionics in the industry.”

While a narrow-body aircraft only requires around 3-4 employees working for eight hours or so to cover it, Mr Safa says that Emirates’ larger aircraft need 4-6 employees working a 12-hour shift. “And taking extra precautions while maintaining social distancing adds its own interesting twist to the proceedings,” he says.

Of the 270 aircraft in its fleet, Emirates had initially parked and wrapped up 218 aircraft – 117 at Dubai World Central and 101 at Dubai International Airport – that involved more than 15,500 man-hours of work. Now around 75 of Emirates’ aircraft, both passenger and freighter, are crisscrossing the planet carrying people on repatriation and cargo on essential missions.

Naturally, these continue to be maintained as per standard operating procedures and some aircraft are undergoing scheduled heavy maintenance in Emirates Engineering’s hangars while currently not required for commercial service.

CHART - Emirates Airlines has reduced its scheduled passenger activity to purely supporting the demand for repatriating citizens, but hopes to resume wider activities in the coming months

Storing aircraft, even for the short-term is nothing new for most airlines. Routinely, Emirates covers all aircraft that are taken out of operations for more than 48 hours. Much before the pandemic, it had to cover a significant part of its fleet during the runway closures at Dubai International Airport, and even during the 2010 volcanic ash cloud disaster that partially grounded the fleet.

But how does it do it and secure the fleet and safeguard aircraft’s ultra-sensitive avionics systems? All apertures and openings through which environmental factors – sand, dirt, water, birds and insects – can find their way inside an aircraft are wrapped up and made watertight. That includes engines and air data probes – such as pitot, static, temperature, angle of attack sensors – engine intakes and exhausts, and APU intakes and exhausts, explains Emirates.

The interiors – whether cabin monuments, seats or inflight entertainment equipment – are also protected from the elements. Potable water systems and aircraft fuel tanks are preserved, and engine and APU systems are protected. The process also involves the greasing, cleaning and preservation of landing gear and flight control systems. The team turns off all cockpit switches, disconnects batteries, and installs control lever locks and window blinds, the airline explains.

After concluding the protection and preservation works, Emirates says its team completes periodic checks at 7-, 15- and 30-day intervals across the fleet. These can include simple walk-around inspections to ensure all covers are in place, and there are no visible damages or external leaks. Complex checks include removing the covers and reactivating aircraft systems, idling engines and testing engine bleed air and flight control systems.

The UAE carrier’s management are already planning to ramp up operations. This was initially planned from May-2020, but now looks more likely to take place from Jul-2020.

According to Mr Safa, the airline needs “around 4-5 dedicated employees and at least 18-24 hours to put just one of its aircraft back into service”. That’s a tremendous amount of work when you consider it has more than 200 aircraft are currently parked, regardless of the schedules the airline plans to operate to meet demand in the ‘new normal’.