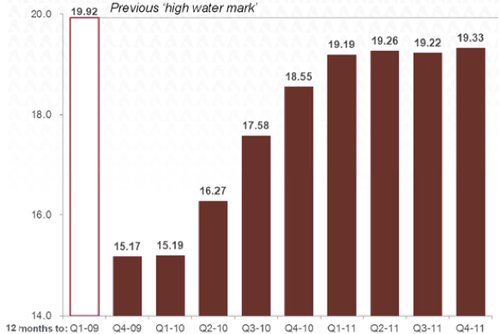 An eagerly watched element of the new group is just how much additional – “synergistic” – value the combination of British Airways and Iberia can generate. The first year of operation appears reasonably positive. IAG surpassed its 2011 synergy target by EUR64 million to EUR134 million. 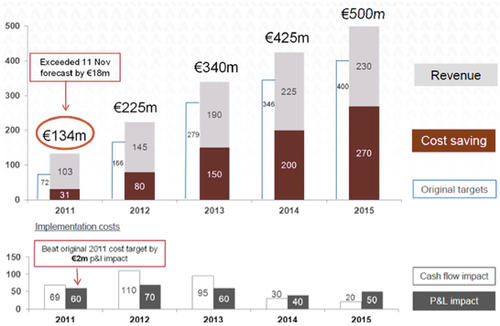 IAG to focus on carrier integration in 2012; Iberia Express in the headlights

IAG plans to focus on addressing structural revenue and cost issues in order to drive increases in profitability in 2012.

This will impact Iberia in particular. The Spanish flag carrier is planning to launch its controversial low-cost subsidiary Iberia Express in late Mar-2012, designed to take over a number of the airline’s short-haul routes. The LCC will be managed independently from Iberia, with a fleet of four aircraft growing to 13 by end of 2012.

This attempt to make the carrier more competitive across its regional European network comes in the face of aggressive LCCs such as Ryanair and easyJet.

With 70% of Madrid passenger traffic connecting over the airport, Iberia Express is expected to have a positive impact on IAG to the tune of at least EUR100 million from savings in crew and operational costs. IAG sees the launch of Iberia Express as “a significant step” towards “maximising profits through efficiency improvements” and says it remains fully committed to the project despite continuing industrial action from Iberia pilots. Mr Walsh attributed losses of approximately EUR3 million per day to the strike action.

The airline’s pilots’ union SEPLA has meanwhile pledged that "the fight (against the opening) will be long and will continue even after the launch of the first aircraft of Iberia Express".

IAG’s proposed takeover and integration of Lufthansa’s bmi is also a key focus for the Group, with the European Commission expected to announce its decision on whether to approve the takeover by 16-Mar-2012. IAG is confident it will be approved, which if successful, will see IAG control 53% of London Heathrow airport slots. bmi will be integrated into British Airways with restructuring costs estimated to cost IAG up to GBP100 million (EUR159.3 million) over three years. The extra slots the Group stands to gain are expected to be used by IAG to develop routes to emerging markets such as Latin America.

Also in 2012 IAG plans to develop a joint venture arrangement between British Airways and Japan Airlines on services between Europe and Japan. The arrangement will also include enhanced links between Europe and Japan with the carriers able to revenue share and coordinate schedules. There will also be enhanced frequent flyer programme cooperation. The proposed arrangement is yet to be approved by the European Union and Japan’s Ministry of Land, Infrastructure, Transport and Tourism (MLIT).

The carrier has a limited number of fleet changes planned for the current financial year, with some of its planned capacity growth deferred.

Uncertainty spells the outlook for 2012

In line with most other European airlines, uncertainty is a key theme of the outlook for 2012. As illustrated by the lack of fleet expansion in summer 2012, IAG expects demand over summer 2012 to be “dampened” by the London Olympics, particularly from the business market, a key part of its revenue stream. However, overall the Group was “encouraged” by strong demand in London, particularly from the North Atlantic premium market.

IAG expects the EU Emissions Trading Scheme (EU ETS) to impact it by approximately EUR70 million annually, based upon an average carbon price of EUR9 per tonne and ASK growth of 1.7%, resulting in a significant competitive disadvantage against non-participating airlines.

Other negatives include the euro zone debt crisis which is affecting demand in many areas, particularly on IAG’s Spanish network and fuel costs are expected to increase by over EUR1 billion in 2012, at current pricing.

The Group’s wider outlook only reinforces the bottom line concerns, as weaker European travel markets, continuing labour unrest and rising fuel expenses hit. So IAG expects a 1H2012 result weaker than 1H2011’s. However, the Group’s year-on-year cost pressures are expected to reduce as it moves through 2H2012.

Some distracting challenges in 2012

As it continues its bid to assert dominance across Europe, IAG will face distracting challenges, working to launch Iberia Express and integrate bmi into its operations. In the short term, management’s preoccupation will be to minimise the damage from pilot (and probable other) union action over the very necessary introduction of Iberia Express. They will be hoping that this does not extend into the medium term and beyond – and that it doesn’t escalate beyond Spanish borders.

And IAG’s competitors will be watching with keen interest to see if CEO Willie Walsh can again achieve a successful outcome in this confrontation. There is more at stake for airlines and for pilots unions than just Iberia Express.