Europe’s largest airline group has decided to further revise full-year capacity growth downwards to 0.5% and rigorously pursue its SCORE restructuring programme to protect yield and combat the dire operating environment marked by economic uncertainties in Europe, a night-flight ban at its main hub in Frankfurt, increased air traffic taxes and above all high fuel prices. Lufthansa Group’s decision follows an unsatisfactory performance in 1H2012 in its passenger airline business segment, which recorded an operating loss of EUR179 million, widening the EUR100 million operating loss recorded in the year-ago period despite a 7.2% increase in revenue to EUR11.2 billion.

The group’s service segments – MRO, IT services and catering – once again made a positive contribution to the Group’s results for the period, with their contribution increasing year-over-year during 1H2012.

Lufthansa Group as a whole suffered a year-over-year 24% decline in 2Q2012 consolidated net profit to EUR229 million on a 6% increase in revenues to EUR7.9 billion. 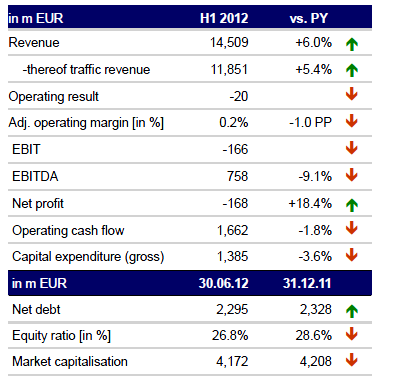 The operating profit realised in the three months to 30-Jun-2012 represents a 28% increase compared to the year-ago period. The Group attributed the improved 2Q2012 operating performance to “consistent” capacity and yield management in passenger and cargo traffic, the clear restructuring successes at Austrian Airlines and positive earnings contributions from the service companies.

However, high fuel costs, the air traffic tax payable in Germany and Austria and fees for emissions trading certificates diminished the Group’s profit.

Total operating expenses climbed 5.7% in 1H2012 to EUR15.6 billion, mainly owing to the 22% hike year-over-year in fuel costs which came to EUR3.6 billion. Fuel costs included a positive result from hedging of EUR154 million. The Group operated about 1.1% fewer flights in 1H2012 and this led to a slight 0.8% reduction in expenses.

Fees and charges during 1H2012 were up 4.5% on the previous year to EUR 2.5 billion, principally due to elevated traffic. The main drivers were an 11% increase in passenger fees, a 5.1% rise in take-off and landing fees and 2.7% higher air traffic control charges. Expenses from the air traffic tax went up by 8.6% to EUR176 million, partly due to the tax that has been levied in Austria since 01-Apr-2011.

Staff costs rose by 2.7% in conjunction with a 2.6% increase in the average number of employees to 117,359, excluding staff at bmi. The sale of the persistently loss-making subsidiary to International Airlines Group (IAG), parent company of British Airways, was closed on 19-Apr-2012 and bmi is thus deconsolidated in Lufthansa Group’s results.

When excluding fuel, the Group’s operating expenses in 1H2012 rose only 1.7% year-over-year.

In commenting on 2Q2012 results, Lufthansa Group’s new CFO Simone Menne said the company’s SCORE for “Change for Success” restructuring programme already had a positive effect, and this “gives us confidence that it is worth the effort”. As part of the SCORE package, which was launched at the beginning of 2012, Lufthansa Group wants to improve its operating result compared with 2011 by at least EUR1.5 billion by the end of 2014. The full effect of the SCORE measures on earnings will be felt in 2015.

The company confirmed in May-2012 that it will cut 3500 full-time jobs in administrative departments worldwide over the coming years as part of its SCORE programme and hinted that jobs cuts on the operational side cannot be ruled out.

“By acting systematically, we want to ensure that we can continue to invest for our customers, secure and create jobs for our staff and maintain our profitable growth. We cannot avoid taking some unpleasant steps, but they will not compromise quality,” Ms Menne noted. She said the restructuring process is on course and a number of projects to reduce staff costs, to step up use of group-wide synergies and improve collaboration in the field of local traffic have been implemented.

The staff cost package should create EUR500 million in savings, joint group-wide procurement is expected to generate EUR200 million in cost benefits in 2012 and the optimisation of neighbourhood traffic should deliver a further EUR30 million, according of Ms Menne’s presentation of 1H2012 results.

SCORE touches on all divisions of the the company. Lufthansa's passenger airlines have been earmarked to make a contribution of EUR920 million with cost-cutting making up two thirds of this, and the remaining third coming from sustainable increases in earnings. The company has already started its SPRINT project, which is designed to boost profitability in intercontinental traffic. The Group also aims to merge Lufthansa’s point-to-point operations, dubbed Direct Services, and Germanwings in both business and organisational terms. Another project, direct4U, aims to heighten combined competitiveness and turn a profit on decentralised European traffic.

It is doubtful that all of Lufthansa Group's targeted restructuring will take place without industrial action. The trade union UFO called a strike ballot on 17-Jul-2012 during ongoing collective negotiations for cabin crew at Lufthansa Passenger Airlines. Voting is due to be completed on 07-Aug-2012.

Breakdown of business segment improvement in the SCORE programme 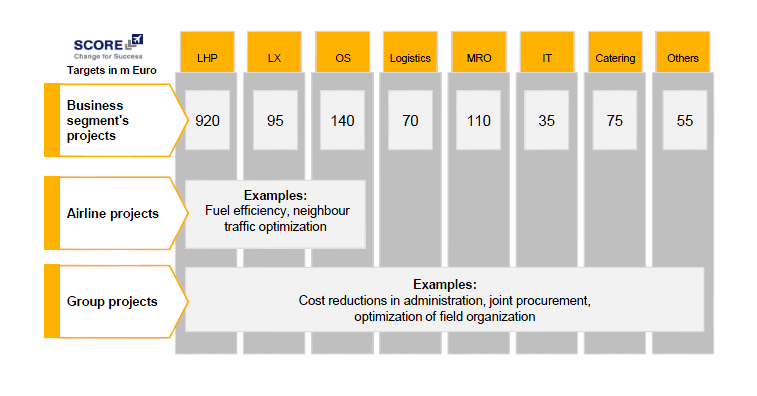 The airlines in the Lufthansa Group increased passenger numbers in 1H2012 by 3.9% compared to the year-ago period to 49.4 million. Passenger traffic rose 3.8% year-over–year to 97.6 billion RPKs on a more moderate 2.3% hike in capacity to 126.9 billion ASKs, improving group-wide load factor by 1 ppt to 76.9%.

The Group’s passenger airline business segment succeeded in boosting revenue across all regions in 1H2012, with factors and yields improving in all geographies.

Surprisingly, the highest passenger traffic growth in terms of RPKs was recorded in Europe, where average yields rose by 2.6% and traffic revenue grew by 7.9%.

Revenues increased particularly sharply in the Americas region, growing 11% year-over-year. With capacity remaining stable, this area saw the most marked improvement in its utilisation. Average yields increased by 8.4%.

The group's traffic revenues also grew 4.8% in the Asia/Pacific region; but yields remained on par with last year. Yields and revenue increased in the Middle East, rising 4% and 3.9%, respectively. 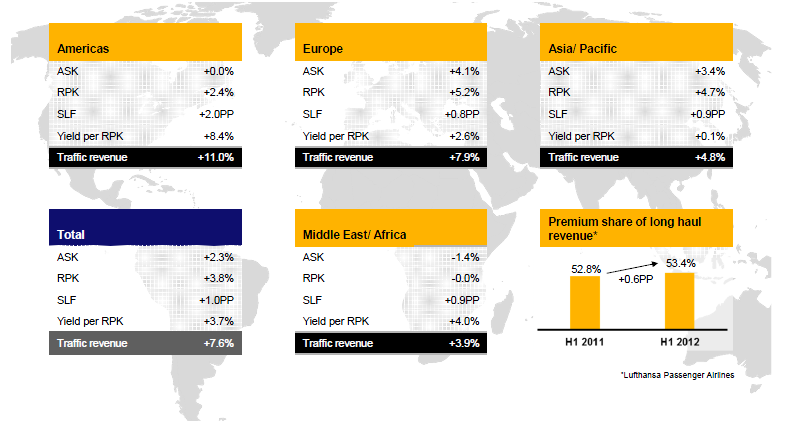 Ms Menne noted that the Group’s passenger airline business segment pursued its strict capacity and yield management in 2Q2012 and all successfully increased their load factors and traffic revenue. To sustain the upward trend in yield, and possibly anticipating a decline in demand as the economic climate in Europe deteriorates, Lufthansa has decided that it will be “again adjusting its capacity growth with the aim of continuing with the positive sales and earnings performance”, Ms Menne said.

Lufthansa German Airlines is using the capacity reduction to phase out older aircraft ahead of schedule and for seasonal adjustments to the flight timetable. The company is removing European connections from Frankfurt to Casablanca, London Gatwick, Larnaca, Palma de Mallorca and Naples from the winter flight plan.

The Lufthansa Group’s cash flow from operating activities totalled EUR1.7 billion in 1H2012, and net debt at 30-Jun-2012 stood at EUR2.3 billion. That is about a third of the debt on the balance sheet of Lufthansa's Franco-Dutch counterpart Air France-KLM Group.

For the full year Lufthansa Group is still forecasting increased revenue and an operating profit in the “mid three-figure million euro” range. This forecast does not include restructuring costs in connection with the SCORE programme and the planned reduction of jobs included in the cost-cutting scheme. These restructuring costs are estimated at EUR100 million to EUR200 million in 2012. 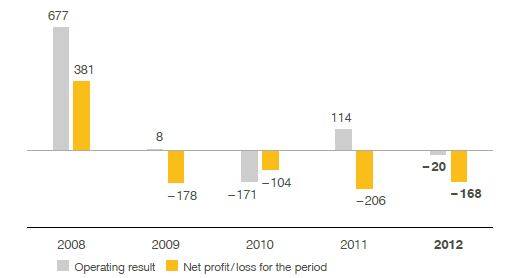 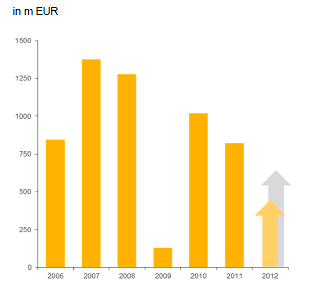