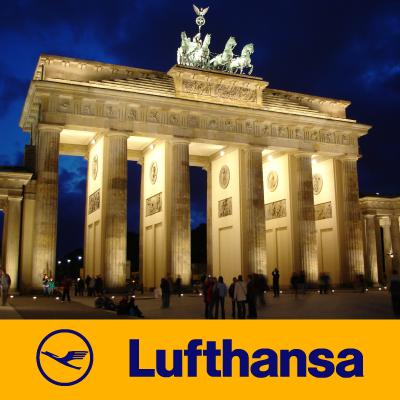 The Lufthansa Group has reported a positive overall result for 2011 with an operating profit of EUR820 million. But this represents a EUR200 million drop in operating profits compared to 2010 as the airline dealt with weaker economic conditions within the EU, rising fuel prices and increasing regulatory pressures through environmental taxation. 2012 will see the Group search for synergies and cost savings under its 'SCORE' programme, and increased attention will be paid to Austrian Airlines as it attempts to return to profitability through restructuring.

Lufthansa Group’s revenue in 2011 rose 8.6% to EUR28.7 billion. The Group incurred a net loss of EUR13 million but this was driven by a EUR285 million loss “from discontinued operations”. This resulted from the Group’s sale of bmi to the International Consolidated Airlines Group (IAG) in late Dec-2011.

Rising fuel costs and increasing regulatory pressures also impacted Lufthansa’s results, with fuel expenses rising 26.4% to EUR6.7 billion for the entire Group. The German-Austrian aviation environmental tax in particular was costly to the group, with EUR361 million paid to authorities within 2011.

Of the Group’s passenger operations, only Lufthansa and SWISS reported profits for 2011. Austrian Airlines, Germanwings and bmi all incurred losses.

Lufthansa Cargo, Lufthansa Technik, Lufthansa Systems and LSG SkyChefs all reported revenue increases. Lufthansa Cargo was unable to repeat its growth rates of 2010, but it was still able to increase its cargo revenue by 5.3% in 2011.

Overall the Group’s fleet decreased by 14 aircraft in the year. But the group expects to take delivery of 168 aircraft from 2012 to 2018 with additional options for 45.

The coming year will see the Lufthansa Group receive 40 aircraft including five Boeing 747-8Is, two A380s, six A330s, 17 aircraft from the A320 family and 10 regional aircraft.

Lufthansa’s SCORE programme, launched in Jan-2012, is aimed at improving the Group’s operating margin in the long term, with cost savings of at least EUR1.5 billion targeted by end-2014. SCORE follows Climb 2011, which resulted in EUR640 in savings with more savings expected to be realised in 2012.

Lufthansa CEO Christoph Franz said the airline must “respond to the change in our industry with flexible structures that enable us to remain Europe’s number one in the future. We also want to keep investing in innovative products for our customers.” SCORE will investigate and realise potential synergies within the Group such as through achieving synergies in purchasing and through further harmonising the Group’s airline networks. Synergies in administrative and management functions are also being driven in an effort to reduce overhead expenses at the Group.

Lufthansa’s passenger business performed well despite the weak European economic climate, carrying 100.6 million passengers in the year, an 8.5% increase on the airline’s 2010 performance. Lufthansa does not expect its passenger traffic to increase in 2011, with capacity growth to be reduced to just 2%.

Destinations of Lufthansa and group airlines (frequencies per week, including codeshares), share of traffic revenue in % 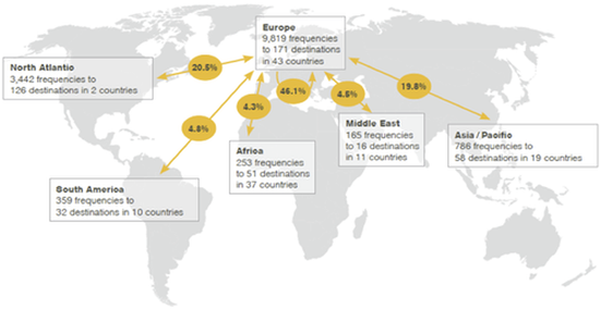 Having sold subsidiary bmi to IAG in Dec-2011 for EUR207 million, Lufthansa’s focus has turned to Austrian Airlines. Austrian is attempting to return to profitability through implementing a ‘work programme’ which will see it modernise its fleet and interiors, while also moving to reduce labour costs which have risen sharply over the last few years.

Lufthansa is well aware of the threat fuel prices can have on its operation. In 2012 70.3% of its expected fuel requirement is hedged, though this drops to 24.9% in 2013. With its fleet modernisation plans Lufthansa will continue to increase the fuel efficiency of its fleet while decreasing its cost base. In line with the Group’s emphasis on innovation, Lufthansa’s first Boeing 747-8I aircraft will enter the fleet later in 2012, showcasing its new business class product. This improved premium product is expected to improve the airline’s yields.

Subsidiary Austrian Airlines remains a concern for the Group, with Lufthansa’s focus now on ramping up the restructuring programme at the airline. All the while low cost carriers continue to compete aggressively across its short haul network and Middle Eastern carriers are raising their challenge in long-haul segments. Competitor airberlin, now in a strategic partnership with Etihad Airways, will provide much of the airline’s new competition out of the soon to be opened Berlin Brandenburg Airport.