Qantas international loss forecast 'over AUD450m' for FY2012, but domestic now pressured too

Qantas announced today that its international operation is expected to report an earnings before interest and tax (EBIT) loss of over AUD450 million in 2011/12. This compares with a loss of AUD216 million attributed to international in FY2010/11. Overall forecast for the year is steeply downgraded to AUD50-100 million. The larger international loss is largely a result of one-off restructuring costs pegged at AUD370-380 million.

According to the carrier, the “structural issues” in the business have been compounded by the impact of global economic factors – including increased fuel costs, the high Australian dollar and weakness in the UK and Europe market – as well as allocating a AUD100 million one-off cost to last year’s industrial action.

Inbound traffic to Australia has softened in the past two months, causing yields to fall, and outbound premium traffic is showing some signs of weakness. But Qantas Group’s domestic business has boomed over the past year, with Tiger temporarily quietened and Virgin relaxing its pressure on the leisure end of the market.

The steep reduction in Qantas’ full year forecast, despite a strong domestic result for the past year – AUD600 million, near to the best ever for the Group – is attributed to the weak international market, high fuel costs and, more recently, the overall softening of the market; ominously too, “excess capacity” is now entering the domestic market. 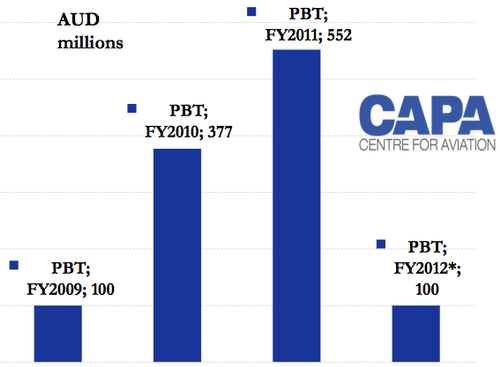 Qantas has been transparent and kept the market up to date on the international transformation costs, which totaled AUD118 million in 1H2012. Qantas previously pegged a further AUD200-225 million in 2H2012 for a FY2012 cost of AUD318-343 million, slightly below its current projection of AUD370-380 million. (It is possible some costs to be realised in FY2012 have been moved up.) As CAPA reported in May-2012: "With benefits outweighing costs starting in FY2013, the net position of Qantas mainline should start to improve, in line with Qantas' objective to return Qantas International to profitability by FY2015 and for the division by FY2017 to exceed the cost of capital."

It is this forward looking aspect of the report – "excess capacity" – and subsequent statements by Qantas management that are most likely to spook the market. Qantas shares slumped over 15% to below AUD1.20 in early trading after the announcement.

A reduced overall underlying forecast of AUD50-100 million profit before tax for the full year of 2011/12 is accompanied by recent marked declines in yields on both domestic and international fronts.

According to CEO Alan Joyce, “excess capacity” at home will continue to be met by an aggressive Qantas, anxious to maintain the "optimal profit maximising 65% share" that the Qantas-Jetstar combination still holds. But Mr Joyce recognised that this will probably have "some short term implications" on yields as a result of sticking to that "long term strategy".

In other words, the war in the domestic market seems about to move to another dimension. As Tiger returns to the market in a bigger way and, as Virgin increases its pressure to become a more powerful force in the domestic premium market, an almost inevitable bloodletting appears to be looming.

With at best a transitional position on international routes, as Jetstar fills the vacuum left by Qantas’ higher cost operations and the downsizing continues, Qantas cannot afford to lose its pivotal position in the domestic market. Mr Joyce has painted this scenario as a do-or-die retention of that 65% market share. That is the healthy part of the yield “S curve” that generates disproportionate returns relative to market share. His predecessor, Geoff Dixon, more prone to hyperbole, used to call it “the line in the sand”. Whatever it is called, there is inevitably a short-term cost in protecting the fort, when the enemy hordes attack.

So it is those “short term implications” domestically that will perhaps be of greatest concern to investors, especially since Qantas does not allow the 65% figure to fluctuate with the ups and downs of yields. It is no surprise that international is losing – although analyst expectations had been for a considerably larger profit result for the current year, given that it has only a few weeks to run.

Virgin Australia in comparison is focused on improving the yield mix in its capacity, a different strategy but one that is logical for it. Tiger is quietly resurgent; Virgin Australia is looking to sell down some equity in its domestic operation, providing it both a strategic underpinning and a stronger capital base and has clearly signalled a willingness for the bloodletting contest – all this as the demand side is showing signs of softening and fuel prices are remaining stubbornly high. (Etihad, one of Virgin’s international partners, today quietly announced it had been buying Virgin stock in the marketplace and now holds just under 4% of the listed Virgin Australia.)

The Jetstar end of Qantas Group is, however, continuing to prosper, able to maintain yield by its effective ancillary revenue streams, according to Mr Joyce. And it may well be here that the Jetstar strategy will once again prove Qantas’ salvation – as it did back in 2004 when then-LCC Virgin Blue was fast eroding Qantas market share.

There are limited concerns for Jetstar, notably in Singapore where Jetstar's loss-making long-haul operation faces new competition from Singapore Airlines' Scoot subsidiary and renewed competition from AirAsia X. Scoot is in Jetstar's backyard with services from Singapore to Sydney and the Gold Coast, which Jetstar only serves with a connecting service, and will launch services to Tianjin, an alternative airport to Beijing, which Jetstar serves and is still finding its feet in. While Tianjin is the alternative airport and is some distance out from the centre for Beijing, the absence at Tianjin of slots restrictions means Scoot has more favorable service times to Jetstar's flights in the wee hours of the morning. Scoot will also serve Bangkok, Jetstar Asia's largest route by weekly capacity (tied with Kuala Lumpur), and has announced services to Tokyo via Taipei. Where overlap is not exact, Scoot is competing with Jetstar for local Singapore traffic. AirAsia X's pull-down from Europe, as well as India, means it has a greater focus on connecting flights from Australia to AirAsia's short-haul network, which competes with Jetstar.

That said, Mr Joyce today remained confident of the Group’s ability to retain a dominant share of the corporate market, where Virgin’s most pointed attacks are coming. The fly in-fly out (FIFO) market has been very strong for Qantas in the past year as the mining boom surged. There will be more from that source in the coming year, but it remains a relatively small proportion of the total, despite its profitability.

While Virgin Australia has made large inroads in regional Australia, which Qantas serves with QantasLink, the carrier Mr Joyce has termed the "quiet achiever", Virgin Australia is far from mounting a network-wide assault on QantasLink as it has done on mainline routes.

Despite the massive loss suffered on Qantas’ international operations, Mr Joyce remained confident of achieving the target of bringing that side back to profitability over the next two years. AUD100 million of the AUD450 million (plus) loss was attributed to industrial action, but there still remains a substantial hangover from the AUD216 million loss in the previous year.

It is not only Qantas' one-stop long-haul international that is under fire. In the very large New Zealand point to point market a Virgin-Air New Zealand combination is now aggressively attacking Qantas' market share, hurting yields; and the arrival of Scoot on the very busy Singapore route (Scoot is flying daily from Sydney and five times a week from the Gold Coast) has put fares in the market around 40% below the incumbents.

Breakeven in this international activity cannot be achieved without more substantial cuts, in one form or another, including more flying by Jetstar. But that alone will not position Qantas Group where it needs to be for the long term. The Qantas brand needs to be visible internationally, even if it means relying more heavily on other airline partners’ metal.

An international partner is no longer a luxury. Its British Airways relationship has been valuable but is more of the past than of the future as far as the British flag is concerned; it sees no future in Kangaroo route yields recovering. Qantas needs a strong partner for its long-haul operations and if it approaches this period next year without one, we will be looking down a very different scenario.

The coming year’s global outlook is going to be somewhere between difficult and very difficult and it will be no place for a high cost end-of-the-line international airline to be out alone.