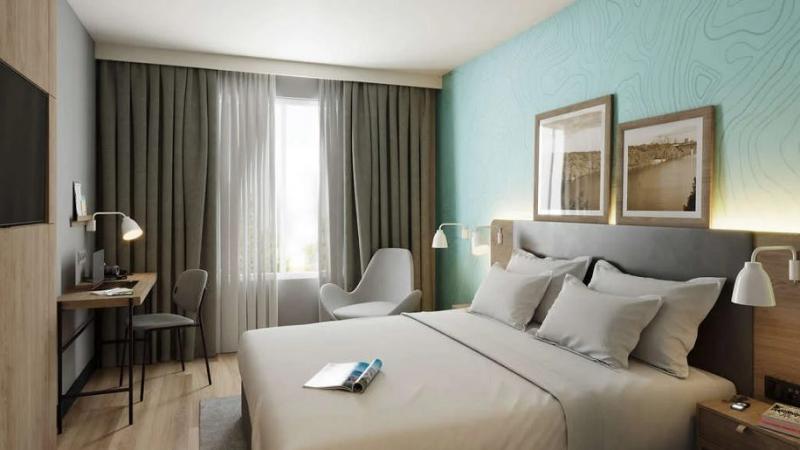 Radisson Hotel Group is looking to double its Indian footprint with nearly 150 hotels and resorts to be added by 2025. This will be achieved through the launch of its midscale brand Park Inn & Suites by Radisson in the country and a strategic alliance with Ruptub Solutions Private Limited which operates a domestic chain of 1,000+ properties in 120+ cities across India under the brand ‘Treebo’.

Radisson says Park Inn & Suites by Radisson will deliver “a warm and heartfelt hospitality experience in a modern yet familiar home-like setting”. The brand’s essence is based on ‘Inviting Modern Comfort’ ensuring that guests “feel welcome, valued, and looked after”.

With an average size of 50 to 70 keys, these hotels will be equipped with inviting social spaces, a welcome corner, a fitness centre, services like free WiFi, and signature breakfast options.

The partnership with Ruptub Solutions Private Limited (launched in 2015 and backed by marquee investors like Matrix Partners India, Elevation Capital, and Ward Ferry Management, among others) will identify and convert quick-to-market opportunities targeting the development of a 150-hotel-strong network of Park Inn & Suites by Radisson properties over the next decade.

Both entities will channel their respective strengths across asset management, technology, business development, and access to global distribution and sales systems to drive value-driven experiences for guests and owners alike.

Radisson intends to use the new brand to fuel growth in tier 2 to 5 markets with a clear focus on value maximisation for its stakeholders. The development of these locations and strategic centres “remains core” to its growth strategy in India, it says.

Radisson is currently the largest hotel operator in tier-1 markets like Delhi NCR and at the same time, more than 50% of its portfolio is in tier-2 and 3 markets where it has benefitted by being the first mover.

It expects nearly 50% of business conversions in the future to be driven by these markets and has materialised this vision by opening hotels under multiple brands in locations like Katra, Surat, Nashik, Bhopal, and Jammu.  It now intends to ‘catalyse’ the Park Inn & Suites by Radisson brand by way of master franchise, collaboration, and brand development agreements with high-quality hotel development partners.

Elsewhere in Asia, Radisson has reached an important milestone in its expansion strategy in Thailand with the signing of Lewit Hotel Pattaya, a member of Radisson Individuals, which marks the brand’s launch in Pattaya, a vibrant beachfront destination on the country’s rapidly emerging Eastern Seaboard.

This modern upscale property will open in Feb-2023 and will operate under a brand affiliation agreement with Land Able Co. Ltd. The contemporary hotel is located less than ten minutes from the peaceful Jomtien beach, yet still within easy reach of the city’s upbeat attractions and activities.

The 100-room hotel features a modern design and a comprehensive range of in-room amenities, and complimentary Wi-Fi.  It is a short drive from Bangkok and Suvarnabhumi International Airport, as well as the regional hub of U-Tapao Airport, making it easily accessible for domestic and international travellers alike.

Radisson continues to strengthen its presence in Africa

Across the rest of the world, Radisson plans to strengthen its presence in Africa with the group holding ambitious intentions to reach 150 hotels and 25,000 rooms within the next five years across the continent, making Africa a key region for growth.

Currently, it has nearly 100 hotels and 16,000 rooms in operation and under development in Africa. In the last two years only, the Group opened over 16 hotels in the region and secured over 25 new hotels, representing more than 4,800 additional rooms to its portfolio.

Earlier this year, it announced that it had surpassed its half-year growth target in Africa. Key markets for the Group’s Africa expansion plan include Morocco, Nigeria, South Africa, Egypt, Cameroon, Senegal and Ivory Coast, demonstrating an equal prioritisation for Francophone and Anglophone countries.

Highlights from 2022 include entry into several key new African markets

This year, Radisson has expanded its presence in Madagascar with a portfolio of three hotels, becoming the largest international operator on the island.

Additionally, it reinforced its presence in Tunisia with the recent opening of Radisson Sfax and the rebranding of La Maison Blanche Tunis as a Radisson Individuals property.

In South Africa, the group expanded its portfolio to more than 14 properties with the opening of its latest addition, Radisson Blu Hotel Durban Umhlanga.

Further to this, Radisson has signed in the last weeks the Radisson Collection Marsa Allam, Egypt with 294 rooms and Radisson Serviced Apartments, Yaounde with 220 rooms – both opening in 2024 and further reinforcing the group presence in key focus markets.

Further Radisson openings confirmed this month include properties in Turkey and Cyprus.

It features 110 standard rooms, premium rooms, and suites. All rooms include a kitchenette with a microwave and stove and amenities such as in-room coffee and tea facilities and free Wi-Fi to make guests feel at home.

Meanwhile, in Cyprus, the brand-new upscale Radisson Beach Resort Larnaca is located on Dhekelia Road, overlooking Larnaca Bay, just a short drive from the city. The property includes 202 rooms and suites, all with private balconies or terraces, many with views of the Mediterranean from the main building, while the resort’s annex building features rooms with swim-up pool access, as well as spacious suites.