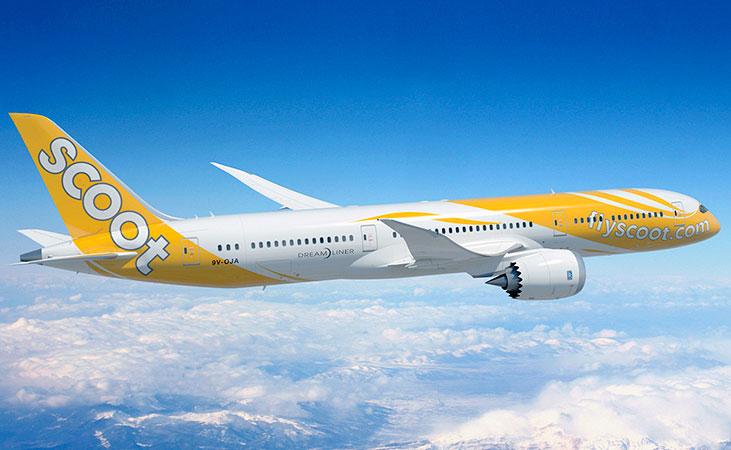 Scoot has taken delivery of its first 787 configured for long haul flights and is using the aircraft on Australia routes ahead of the Jun-2017 launch of services to Athens, its first true long haul route.

The new 329-seat 787-8, configured with 311 economy and 18 premium seats, was delivered in mid Apr-2017 and has been operating revenue flights since 25-Apr-2017. The aircraft has so far been dedicated to the Australia market, operating all of Scoot’s five weekly flights to Melbourne and some of Scoot’s four weekly flights to Gold Coast.

Scoot plans to take delivery of a second 787-8 equipped for long haul operations on 11-May-2017. It is slated to take two more long haul configured 787-8s in its current fiscal year (which ends 31-Mar-2018), giving it a sub-fleet of four aircraft for long haul flights.

Scoot has so far only announced one long haul route, a four times weekly service from Singapore to Athens that will be launched on 20-Jun-2017. This service will be downgraded to three weekly flights from mid-Sep-2017 and to only two weekly flights from mid Oct-2017. Until Scoot announces and launches more long haul routes, the sub-fleet of long haul configured 787-8s will need to operate some medium haul services including to Australia.

Scoot’s longest current route is Singapore-Jeddah at nine hours. Scoot has three routes of seven to eight hours – all to Australia. The bulk of its network are flights of four to six hours – mainly to North Asia and India (as well as Perth). Scoot also has five short haul routes of under four hours, including Singapore-Bangkok and four fifth freedom routes from Taiwan to Japan and South Korea.

Scoot is therefore now essentially a medium haul operator with a few short haul routes. Scoot considers Singapore-Athens to be its first long haul route with crew rest requirement the determining factor. None of Scoot’s current routes are long enough to require crew rest. Therefore, Scoot has not equipped any of its initial fleet with crew bunks – or had to block off any seats in the passenger cabin to provide a makeshift resting area for crew.

The new sub-fleet of 329-seat 787-8s includes crew bunks, resulting in six fewer seats compared to its initial fleet of six 787-8s, which were delivered in 2H2015 and 2016. These 787-8s have since been regularly used on all four of Scoot’s Australia routes (Gold Coast, Melbourne, Perth and Sydney). They offer 314 economy class seats (compared to the 311 seats on the new 787-8 currently used on the Melbourne route) and 21 in ScootBiz (compared to only 18 in ScootBiz on the new aircraft). On the long haul equipped 787-8s Scoot has had to remove three seats from the front row and three seats from the last row in order to make room for ladders to the two crew rest areas.

Scoot also operates six 787-9s, which are configured with 375 seats, including 35 in ScootBiz and 340 in economy. All six of these aircraft were delivered in 2015, enabling Scoot to phase out its initial fleet of six 777-200s – which it used during its initial two plus years of operations. Scoot deploys the 787-9s on some of its Australia flights, particularly during peak periods, but on a year-round basis the 787-8 has been more common.

While the 329-seat 787-8s do not have to be used on long haul routes, deploying the aircraft in other markets such as Melbourne forces Scoot to cut seat capacity by 5%. Scoot’s decision to use the smaller capacity aircraft on the Melbourne route could be an indication that Melbourne is one of its poorer performing routes.

Melbourne-Singapore is an extremely competitive route as it is also served by Jetstar Airways, Emirates, Singapore Airlines and Qantas. It is one of only two routes in the world served by two long haul low cost operators.

However, it is unlikely Scoot would be able to sell the six extra seats on most of its Melbourne flights. Scoot seems to have plenty of unsold inventory on Singapore-Melbourne, an indication the route is oversupplied. Even last second fares on Scoot for travel in May-2017 are available at AUD169 one-way from Melbourne to Singapore and AUD161 from Singapore to Melbourne. These fares, which include taxes but no bags or meals, are available consistently rather than just select days.

Scoot is hoping to improve its performance in the Melbourne market by relying more on sixth freedom connecting traffic, including Athens and not yet announced new European destinations which will eventually be launched with the new long haul equipped 787-8 sub-fleet. However, Scoot is not currently offering quick connections from Athens to Melbourne and from other key connecting markets, including India, because it has not yet retimed any of its Melbourne flights. Scoot recently retimed some of its Sydney flights to provide better connections with India and potential new European routes. Blue Swan will review these changes and how it impacts Scoot’s position in the Sydney market in a separate upcoming report.