Warnings by Southwest Airlines that emerged during late 2011 of a cost creep are crystallising as the carrier is cautioning that a 6% hike in 3Q2012 unit costs will continue into 4Q2012. At the same time the airline is warning the industry at large faces choppiness as economic signals going forward are mixed. As a result Southwest is attempting to craft a strategy of cost cuts and revenue enhancements to bolster its defences against a potentially weaker economic environment in 2013.

The carrier recorded a profit of USD16 million during 3Q2012 that included USD81 million of negative special charges, compared to a USD140 million loss for the year-prior period. Factoring out special items, the carrier stated it has recorded a USD97 million profit for 3Q2012 versus a USD122 million profit for the year prior, which was still a 20% slide in quarterly profits. Southwest’s operating income also fell by USD174 million to USD51 million. 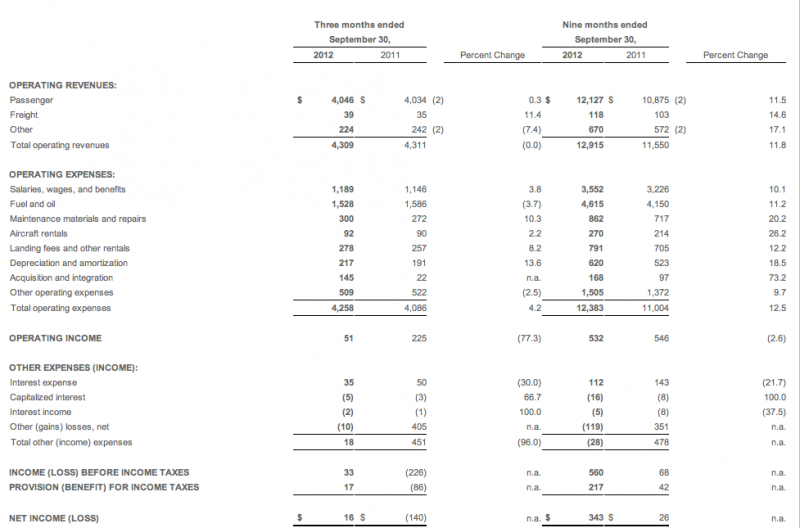 Through 18-Oct-2012 Southwest has pushed through five fare increases (compared with eight for full year 2011), but the airline admitted that while those efforts have been revenue positive, they’ve had a less dramatic effect on revenue than fare hikes instituted in the past.

Southwest during 3Q2012 also initiated discounting on walk-up fares to combat weaker demand and more aggressive fare competition. During 3Q2012, Southwest’s average fare fell from USD143.03 to USD142.86 year-over-year. While the carrier maintained close-in bookings during the quarter at 20% and the business fare mix at 35%-40%, which was flat year-over-year, yields were down due to the lower walk-up fares. Southwest’s yields fell 0.8% year-over-year while passenger unit revenues grew a modest 1%.

The airline’s total operating revenues remained flat year-over-year during 3Q2012 at USD4.3 billion while expenses grew 4% to nearly USD4.3 billion. The largest increases were a 10% rise in maintenance costs and depreciation expense, which increased 13%. Southwest executives explained the maintenance increases were driven by its fleet renewal effort, dubbed Evole, that entails adding six seats to its Boeing 737-700s (and an undetermined number of 737 classics) and the altering of an engine contract covering the CFM International engines powering its 737-700s to fold in maintenance of engines on AirTran’s -700 fleet. Southwest is in the process of a merger integration with AirTran after acquiring its smaller rival in May-2011.

But Southwest also recorded a hefty rise in its unit costs, excluding fuel and profit sharing, of 6% driven in large part by the fleet renewal. The carrier expects to record a similar rise in unit costs during 4Q2012 as the reconfigurations continue and certain deferred advertising expenses require payment. 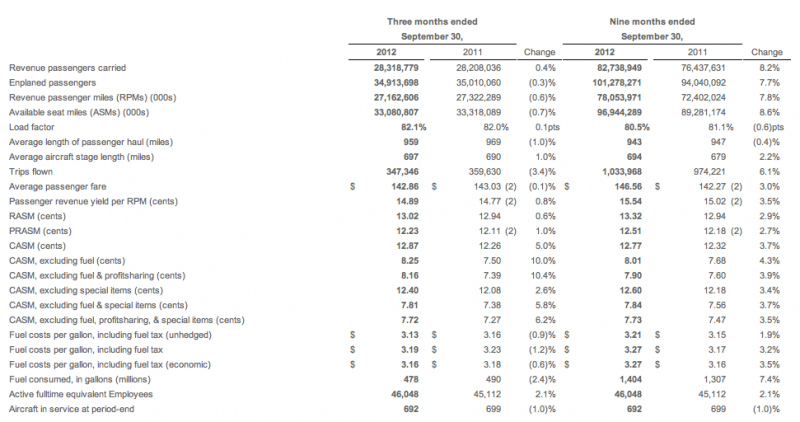 Carrier management led by CEO Gary Kelly stressed that the cost inflation experienced by Southwest is unsatisfactory, and the airline has officially pledged to undertake a cost cutting scheme to shave USD100 million from its expenses during 2013. Mr Kelly declined to offer specifics other than indicating Southwest was considering lowering its supplier costs, examining ways to create more efficiency in its supply chain and possibly halting projects underway that could be frozen in an effort to curb spending. He remarked the carrier has no plans to initiate layoffs, but has a desire to control its hiring to ensure that staffing levels remain flat over the next year.

Looking out into 2013, Southwest is not offering specific cost guidance, but carrier CFO Tammy Romo said the airline’s continuing investment in its fleet revamp would result in some unit cost increase during 2013, but she said that costs would likely be flat during 2H2013 as the fleet reconfigurations are completed. She reiterated previous guidance offered by Southwest that the fleet project would make a positive contribution of more than USD700million by 2015.

Southwest management also stated it aims to look at ways to enhance revenue during 2013 in order to hit its often-stated return on invested capital goal of 15%. For the 12 months ending 30-Sep-2012 its ROIC was 7%. However, Mr Kelly declared that while Southwest is not currently hitting its return targets, “our goal is to hit our return target in 2013”. As the demand outlook for 2013 continues to become murky, Southwest faces a formidable challenge in closing the 8ppt gap in hitting its stated return goal. The carrier is not yet ready to disclose new revenue initiatives under consideration, other than stating that it has no plans to abandon its Bags Fly Free initiative, which has been a cornerstone of its brand since other US carriers began charging for checked bags in 2008 at the onset of record high fuel prices that ushered in a new era of capacity discipline and new-found ancillary revenue streams.

One of the previously-disclosed initiatives planned for 2013 is the roll-out of the first phase of a new revenue management system for Southwest, which could help the carrier to better refine its pricing to grow yields, which will be key for any sustained revenue improvement.

Even as its costs continue their rise to legacy carrier levels, Southwest is taking care of its balance sheet, paying of USD517 million in debt this year and keeping its leverage around 40%. As of 30-Sep-2012 its cash balance stood at USD3.5 billion.

Southwest during Sep-2012 recorded a 2%-3% decline in unit revenues year-over-year, which was in line with the 2.5%-3.5% drop recorded by United Airlines, whose unit revenue growth has lagged the industry during 2012. Mr Kelly remarked that Southwest’s revenue decline during September, mirrored “what was going on in the rest of the industry”. Delta Air Lines also missed its September unit revenue targets as it recorded slightly lower walk-up demand.

Although Southwest’s unit revenues for Oct-2012 are tracking 4% higher year-over-year, Mr Kelly cautioned that he was not “attempting to qualify October too much” as the carrier continues to be very concerned about the economy. He remarked that it is somewhat of a mystery as to why Sep-2012 was weak for the industry and Oct-2012 appears to be somewhat normal.

Noting that Southwest was ahead of its earnings plan in Jun-2012, Mr Kelly stated that now the carrier, just three months later, is significantly behind for the year, “so that’s how fast things have turned on us and why it makes it really tough to predict from here”.

He explained that with current consumer spending Southwest “gets an all you can eat” as long as the carrier achieves optimal price points and sales efforts, evidenced by the company’s record load factors. The carrier’s loads during 3Q2012 were essentially flat at 82%. However, Mr Kelly noted that business demand “seems to be the softer piece”. US Airways, which has a more domestic oriented network than its legacy airline peers, has also recently stated it is seeing some softness in business demand.

But Southwest’s underlying concern about economic conditions remains strong as Mr Kelly stated that travel demand remains uncertain and the oil market is extremely volatile. The lacklustre performance the US industry recorded during Sep-2012 could be an anomaly, but Southwest for now is not ready to declare that the rebound it is experiencing in Oct-2012 will be sustained. Its concern over continued economic weakness parallels caution recently expressed by United Airlines about a slowing economy. While Southwest hunts for new initiatives to introduce during 2013 to shore-up its revenue, any demand degradation will create challenges for Southwest and all carriers to effectively manage their revenue growth as 2012 comes to a close and 2013 begins.