Incessantly high fuel costs and an unwelcome increase in employee expenditure, highlighting the urging need to restructure workforce productivity and pay, pushed Air France-KLM Group into a deeper loss for 1Q2012 despite a surprising rise in passenger unit revenue and buoyant passenger traffic. Operating loss for the first three months widened almost 50% from EUR403 million to EUR597 million in the year-ago period. Air France-KLM’s net loss remained flat at EUR368 million but benefitted from a one-off gain of EUR98 million relating to the sale of a stake in Amadeus.

Conversely, Aer Lingus has recorded a 33% improvement in its operating result, with losses of EUR36 million in 1Q2012 compared to EUR54 million a year earlier. The Irish carrier’s quarterly result was driven primarily by strong revenue performance with yield per passenger up 8% while passenger numbers increased by 7%. Total 1Q2012 revenue increased by 15% compared to the prior year. International Airlines Group (IAG), parent company of British Airways and Iberia, will report 1Q2012 results on 11-May-2012.

Air France-KLM employee costs rose too much in 1Q2012

Air France-KLM said 1Q2012 was a “tough quarter, but in line with our expectations” and stressed its confidence that the first benefits of its comprehensive Transform 2015 restructuring plan will start feeding through in 2H2012. There might be some naive optimism in this prediction, probably guided to keep the financial markets satisfied, as formal negotiations with French unions have only started in Apr-2012 and the outcome will be very dependent on the attitude of the country’s new president and government.

Air France-KLM Group CFO Philippe Calavia said during an analyst presentation to discuss the 1Q2012 results that he was confident the outcome of French elections would not have an impact on the group's ability to implement a restructuring plan and that an incoming government would understand the need for drastic changes. He said the company is steadfast in respecting its end-June deadline to reach an accord with unions on cost cuts.

The French state owns a 15.8% shareholding in Air France-KLM and would benefit from having a healthy flag carrier, but keeping social peace has been the mode de vie at the French unit since its merger with KLM. The group’s French medium-haul operations accrued EUR700 million in losses in 2011.

The Franco-Dutch group has set a 20% cost reduction target as part of its Transform 2015 overhaul project. This includes an “immediate” EUR 1 billion cost reduction over three years, which includes EUR500 million in payroll measures, EUR150 million through the reduction of overheads and EUR200 million via the increased productivity and network adaptation.

Air France-KLM employee costs in 1Q2012 rose 6% on the year-ago period to EUR1.9 billion and exceeds by EUR200 million the total employee cost of the Lufthansa Group, which generates EUR1 billion more in revenues. The fuel bill for both groups was EUR1.6 billion for 1Q2012.

In releasing its 1Q2012 results on 04-May-2012, Air France-KLM said that it is “highly focused” on the ongoing negotiations in the current context of an uncertain economic environment and rising fuel prices. The group anticipates that its fuel bill for 2012 will increase by EUR1.1 billion to EUR9.9 billion after hedging. 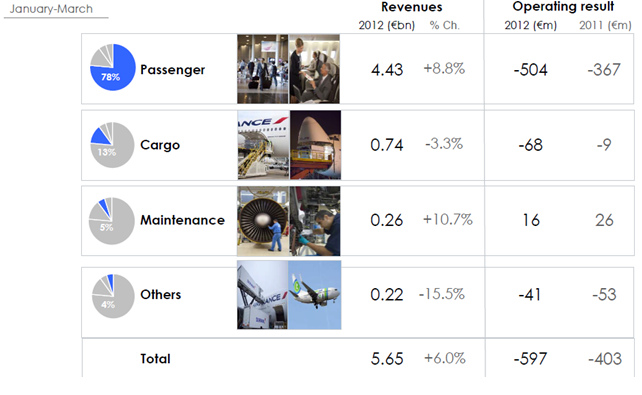 Air France-KLM Group restricted capacity growth in 1Q2012 to 2% for its passenger operations and reduced the output for the cargo operations by 2% on the year-ago period. The discipline resulted in a nice uptick in passenger traffic with 6% (in RPKs) and load factor consequently improved 3.1 ppt to 81.6%.

Unit revenue RASK rose 6% (+5% excluding currency effects) and yield inched up 2% network wide, even with a slight improvement on the medium network where Air France launched a so-called regional “commercial offensive” with crew and aircraft bases at secondary airports aimed at curbing the growth of budget carriers and French high-speed rail while also returning its regional operation to profitability.

Air France’s regional strategy was originally announced in Oct-2011, focussing on the airline’s operations in southern France. This saw the SkyTeam carrier immediately open a regional base in Marseille. Two more bases, Toulouse and Nice opened in Apr-2012 while a base in Bordeaux and Paris Orly are planned for later in 2012. 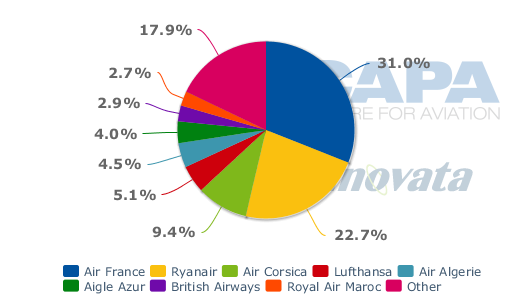 Air France added four routes at its new Marseille base in Mar-2012 to Barcelona, Marrakech, Hamburg and Venice. On 28-May-2012 it will launch an 11 times weekly service to Toulouse and on 08-Jun-2012 a twice weekly service to the new Berlin Brandenburg Airport.

To fend off the increasing competition of the Gulf carriers and protect long-haul yields, Air France in Mar-2012 took a U-turn on is position on the Gulf carriers and initiated talks with Etihad Airways. Discussions with the Abu Dhabi-based airline are ongoing, Mr Calavia said during a conference call with analysts on the company's first-quarter results on 04-May-2012. “It's mainly at this point in time a commercial negotiation to try to reach a win-win agreement with this potential partner which has quite a different capacity policy and strategy compared with other operators in this area,” Mr Calavia said, noting there is no deadline for a conclusion to the talks.

Passenger revenues rose by 9% and total revenues by 6% in 1Q2012, compared to 6% increase of passenger and total revenues at Lufthansa Group. But as with its larger peer, the improvement in traffic and unit revenue was insufficient to compensate for the rise in costs, notably fuel. Total operating expenses grew at a higher rate of 9%. Excluding fuel, total operating costs rose by 6%.

In 1Q2012, only the group’s MRO and catering activities were profitable. Results of leisure/LCC subsidiary Transavia Airlines were negative, with a EUR45 million operating loss in 1Q2012 on a 9% pro forma increase in revenue.

Developing the French unit of Transavia and transferring some routes from Air France mainline to Paris Orly-based Transavia France, which has a lower cost base, is now being considered as a possible scenario to help bring Air France’s short-haul point-to-point services to a breakeven level in 2013. However, this would also require the renegotiations with the unions of the current agreement, which reportedly caps the number of routes and aircraft. 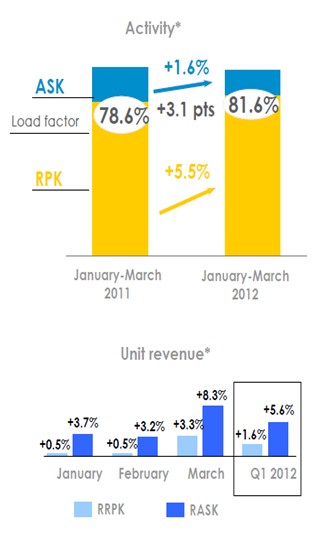 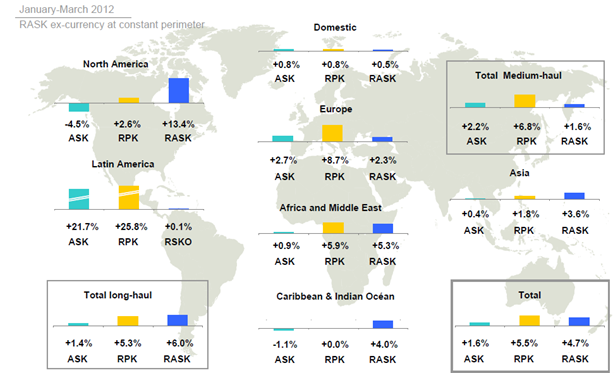