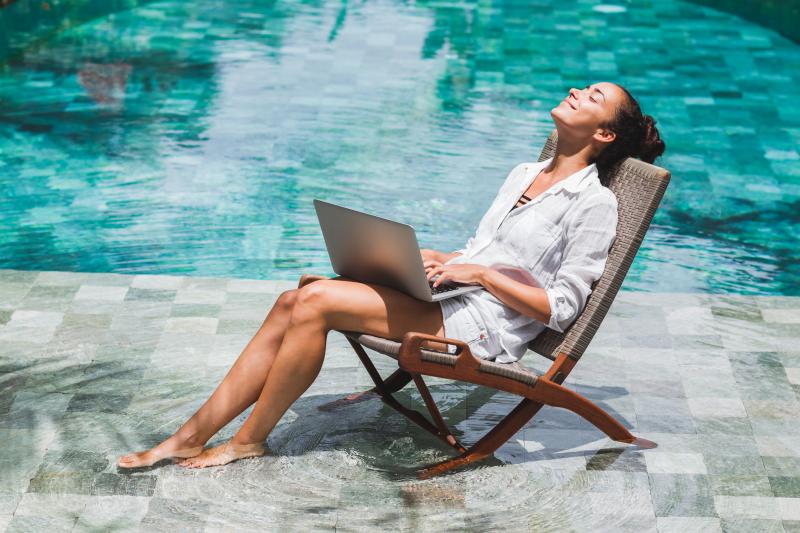 With millennials making up a growing share of the workforce, they've been quick to capitalise on a new, unofficial work perk. Bleisure travel – the trend of blending business with leisure activities on business trips – is on the rise, providing a greater quality of life and work/life balance to those who take advantage of it.

According to the second annual ‘State of Business Travel Survey’ by National Car Rental, 90% of millennials have engaged in bleisure travel in the past year compared with 81% of Generation Xers and 80% of baby boomers. While all three generations benefit from bleisure travel, recent industry reports say millennials have led the way in normalising the trend. Nearly half (49%) say they've extended business travel into a leisure trip or scheduled a vacation around business travel to save on costs.

Across all three generations, those who engage in bleisure travel are significantly more likely to be satisfied with their quality of life (93% versus 75%) as well as their work/life balance (87% versus 64%) while on the road than non-bleisure travellers, the research shows.

In addition, it highlights that bleisure travellers are more likely to prioritise self-care on the road than non-bleisure travellers, which includes following a healthy diet (42% versus 29%) and exercising (57% versus 31%).

Despite these benefits, millennials are also leading another trend, according to the findings: bleisure travel stigma. Nearly half (45%) of them feel they should avoid telling others about taking time for fun or personal activities while on a business trip compared with 40% of Gen Xers and 30% of baby boomers. This trend is expected to change though as today's junior-level employees reach management positions.

The National Car Rental ‘2019 State of Business Travel Survey’ was conducted in Nov-2018, among 1,000 US frequent business travellers. The survey also found that regardless of what bleisure activity they pursue, business travellers look to technology to keep them more connected than ever.

For example, 93% of frequent travellers prefer travel brands with technology that simplifies the travel experience and business travellers use an average of 3.1 travel apps when they travel for business. Unsurprisingly, millennials (46%) are significantly more likely than Gen Xers (37%) and baby boomers (35%) to say they always choose travel brands based on the technology they offer.

The rise in solo travellers - they do what they want, when they want!

The rise in ‘bleisure’ is supporting a growth in solo travel, but they extends beyond just that market. Further research has discovered that one in three (32%) over 50s in the UK have been on a solo holiday or said that they intended to do so within the next two years. The most attractive element of travelling, according to the findings of Saga, which specialises in providing products and services to people aged over 50 in the UK, was the freedom to do whatever they choose (85%) followed by meeting like-minded people (72%).

According to the research of more than 12,000 over 50s people are now choosing to travel alone, leaving their loved ones behind in pursuit of their passions and do what they want, when they want. “Today’s modern solo traveller is no longer defined by their relationship status but instead by the passion for travel and experiences,” says the company.

There are many reasons why people choose to travel solo. The most attractive elements of solo holidays are the ‘freedom for solo travellers to do whatever they choose’ (85%), followed by ‘meeting likeminded people’ (72%). Two thirds said the appeal of a solo holiday was that they like time on their own and 44% said that they like the invigoration of solo travel.

The survey findings show that female travellers (39%) were more likely than their male counterparts (26%) to have either been on a solo holiday or to have said that they intended to do so and reported that their main motivation to travel alone was to pursue their own passions and not somebody else’s (24%).

The use of smartphones and travel apps have made travelling the world alone less intimidating and have potentially encouraged solo travel. Meanwhile, price (46%) was found to be the most important factor when considering solo travel plans, with a third of people saying they felt disadvantaged by choosing to travel alone.