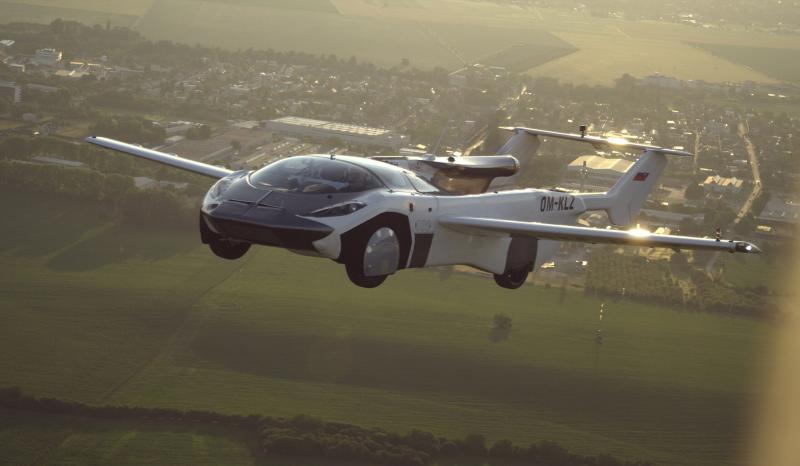 Many believe that the solution to crowded roads in urban centres is to take to the air. Urban air mobility is certainly the popular thinkers answer and there are a plethora of concepts for small and sustainable aircraft to provide mass transportation for intra-city, short-haul and even regional travel.

One such example is AirCar, a dual-mode car-aircraft vehicle, which moved closer to production this week after fulfilling a key project milestone in its development with an internal flight between two airports in the land-locked Central European country of Slovakia.

Klein Vision’s patent protected AirCar completed its 142nd successful landing at Bratislava International Airport shortly after 6am on the morning of 28-Jun-2021 after a 35-minute flight from Nitra, city in western Slovakia. After landing, at a click of a button the aircraft transformed into a sports car in under three minutes and was driven by its inventor, Professor Stefan Klein and co-founder, Anton Zajac to downtown Bratislava, cutting the typical travel time from Nitra to the centre of the capital by a factor of two.

The AirCar Prototype 1 is equipped with a 160HP BMW engine with fixed-propeller and a ballistic parachute. Under the supervision of the Slovakian Civil Aviation Authority, the AirCar has already completed over 40 hours of test flights, including steep 45 degree turns and stability and manoeuvrability testing. During these trials the prototype has flown at a height of 8,200 feet and reached a maximum cruising speed of 190 kilometres per hour (103 knots)./IMAGE

The AirCar Prototype 2, the pre-production model, will be equipped with a 300HP engine and receive the EASA CS-23 aircraft certification with an M1 road permit. With its variable pitch propeller, the Prototype 2 is expected to have a cruise speed of 300 kilometres per hour (162 knots) and range of 1,000 kilometres (621 miles).

“This flight starts a new era of dual transportation vehicles,” said Professor Klein after exiting the AirCar cockpit in Bratislava, and “opens a new category of transportation and returns the freedom originally attributed to cars back to the individual.”

“AirCar is no longer just a proof of concept; flying at 8,200ft at a speed of 100kt, it has turned science fiction into a reality,” added Anton Zajac, the co-founder of Klein Vision.