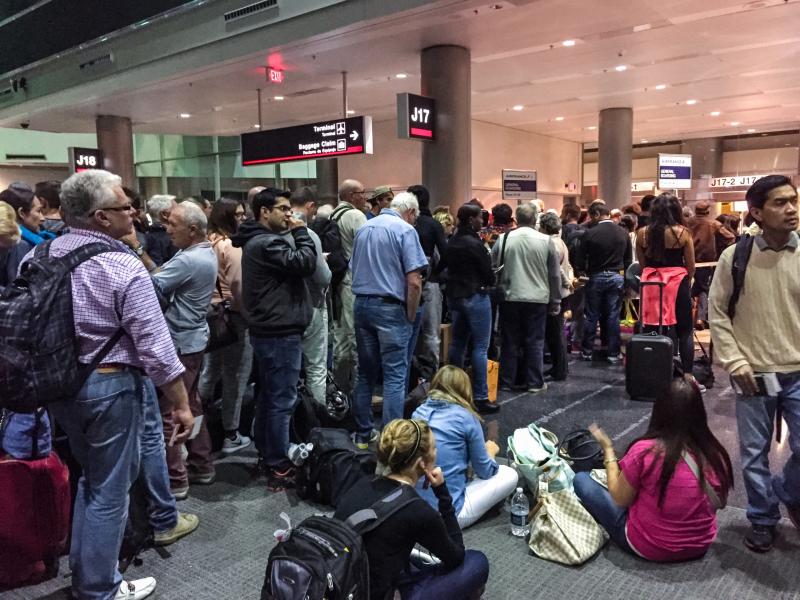 This last weekend wreaked significant disruption on thousands of people travelling into the United States, following President Trump’s ‘Executive Order on Protecting the Nation from Terrorist Attacks by Foreign Nationals’ on 27-Jan-2017. The Executive Order impacts the ability of citizens of seven Muslim-majority countries from entering the United States for the next 90 days and suspending the admission of all refugees for 120 days.

As well as inconveniencing thousands of people, the sudden order creates significant issues for airlines, who are in the firing line of having to enforce the new rules, often when passengers arrive at the airport to check in. It also creates operational headaches for airlines, for example Emirates, Etihad and Qatar Airways, with crews of diverse nationalities including those listed on the Executive Order.

According to Australia’s Department of Foreign Affairs and Trade (DFAT) site smartraveller.gov.au and the New Zealand government’s SafeTravel site, visa issuance to nationals of Iraq, Iran, Libya, Somalia, Sudan, Syria and Yemen has now been temporarily suspended following the signing of the Executive Order.

Australians and New Zealanders affected by the Order

According to both Smartraveller and SafeTravel, under the Executive Order, Australian and New Zealand dual citizens of Iraq, Iran, Libya, Somalia, Sudan, Syria and Yemen, are now no longer eligible to apply for an ESTA (Electronic System for Travel Authorisation) to enter the United States under the VWP (Visa Waiver Program).

Both sites further advise that any Australian or New Zealand dual citizens who have previously been issued an ESTA are now likely to have the ESTA revoked, with some exceptions.

Further, with limited exceptions, Australians and Kiwis who have travelled to Iran, Iraq, Libya, Somalia, Sudan, Syria, and Yemen since 1 March 2011 are also ineligible to apply for an ESTA to enter the United States under the VWP. This, however, is a policy introduced in 2016 by the Obama administration and isn’t the result of Trump’s Executive Order of 27-Jan-2017.

For Australians and Kiwis who don’t fall under the scope of this latest order, it’s business as usual though, with the ESTA program continuing to apply, albeit with a longer 72-hour estimated turnaround for approval.

Impact on travellers as many airports experience chaos due to uncertainty

The impact of this sudden change and implementation has left both the airline industry and passengers equally in chaos as tens of thousands of passengers were detained at several US airports or refused boarding on flights bound for the United States over the weekend.

The American Civil Liberties Union successfully argued for a temporary stay, before a Federal Judge in Brooklyn, New York, that allowed detained travelers to stay in the United States temporarily. The Federal order doesn’t overturn Trump’s Executive Order though and only had the effect of assisting passengers who were immediately affected on the day and hours following.

The effect of Trump’s Executive Order hasn’t yet been fully digested across the global aviation industry – which, as a result, is playing it safe and in some cases refusing to carry passengers it suspects may not be eligible for entry to the United States.

Under Annex 9 of the Chicago Convention - which governs civil aviation globally – an airline has the responsibility to ensure passengers have the correct documentation and/or authority to travel. Airlines can be fined for carrying a passenger who doesn’t have the necessary visa or permission to enter the destination country. This can include the very costly responsibility of repatriating the passenger if they’re refused entry on arrival. That’s a particular headache the airlines try to avoid.

Much compliance falls on airlines to enforce

It appears the Trump Administration is committed, at least in the short term, to applying these tough new measures. For the airlines, this will shift further the focus on compliance to ensure they aren’t left exposed where a passenger not holding the correct visa/eligibility is accepted into one of their flights but rejected on arrival.

In circumstances where tickets have been purchased by ineligible passengers before 27-Jan-2017, airlines will likely be forced, even just for good PR, to refund those tickets. Qantas, for one, has offered refunds to passengers affected by these new restrictions. Air New Zealand and Virgin Australia have asked affected passengers to contact them, without guaranteeing that refunds will be provided, at this stage.

As nationality information is rarely required in the booking process, airlines find themselves in the difficult position of having to refuse boarding where a passenger may be refused entry into the US. Even Australians and New Zealanders who for example also hold Iraqi citizenship will not be boarded.

The Executive Order impacts one country on the verge of significant economic growth, Iran. With the easing of Iranian sanctions, many airlines, including Emirates, Lufthansa and British Airways have already commenced (or are planning) new services to Tehran. The Executive Order will likely impact the viability of these services short term, to the extent that onward travel involves the US.

For passengers, the disruption commenced when the previous Obama Administration removed ESTA eligibility from those who had travelled to Iran, Iraq, Libya, Somalia, Sudan, Syria, and Yemen since 2011. The disruption now deepens as dual nationals are now impacted, regardless of whether they’ve travelled to those countries recently.

As borders tighten, both the airline industry and passengers will again be forced to adapt to this new reality, however long it lasts.