Twenty destinations that have transformed the most in 20 years – Doha is at the top, Spain is the best-represented country, but no cities from North America or Oceania make the list 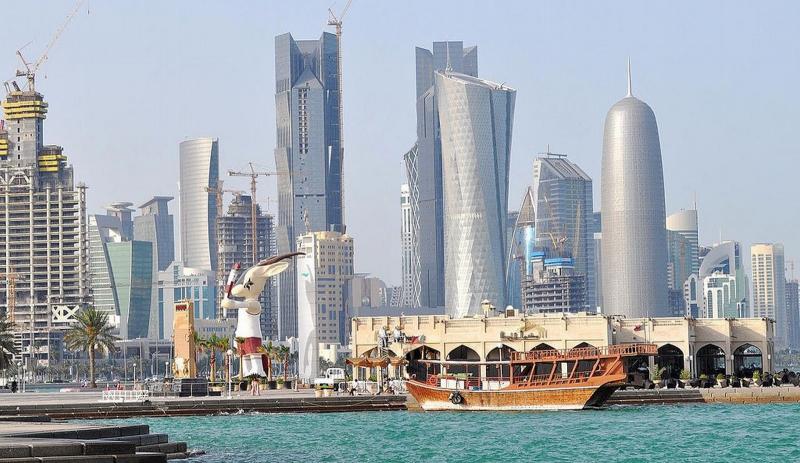 The world has changed significantly over the past 20 years and that is not more evident than in global connectivity terms. Flying has never been more accessible - the time between flights of an average global citizen was 43 months in 2000, but that has now halved to around 20 months. The growth since 2000 has been remarkable as annual passengers have increased from 1.67 billion to over 4.5 billion and it is forecasted to rise significantly further through the 2020s.

An interesting new analysis has highlighted the cities in the world that have seen the most significant change in air passenger demand over the first 20 years of the century. The ’20 destinations that have transformed the most in 20 years’ ranking from travel agent Tourlane highlights how global travelling habits have changed, how connectivity has evolved, and how new markets have emerged.

The analysis is based on simple city growth in passenger arrivals at gateway airports, and while it may not entirely study like-for-like figures due to data availability, it does provides an insight into changing travel trends and shows that many cities around the world that were not previously known as travel destinations have enjoyed a surge in popularity during the first fifth of the 21st century.

The 20 destinations that have transformed the most since the last millennium includes cities from across the globe, including the Middle East, Europe, Asia, Africa, and Latin America. All have experienced more than a 100% increase in arrivals since 2000, but there are none from North America, nor Oceania.

Europe dominates overall, with half of the cities in the list hailing from the continent, although two of the top three cities are located in the Middle East. Meanwhile, Asia accounts for almost a third of the listings, highlighting the general growth in air travel in the region. Spain, a relatively mature tourist market, is the most prevalent country with three of its cities (Valencia, Seville and Bilbao) making it into the top 20.

But it is Doha, the capital of Qatar, that tops the list, a city that has seen remarkable growth and thanks to the development of national carrier Qatar Airways has become a major global hub with its Hamad International airport gateway becoming a key transit crossroads for global air travellers.

Vilnius, Lithuania’s capital city takes the second spot having experienced an unprecedented period of growth and prosperity. And while Doha’s growth has been mainly thanks to a strong national airline, Lithuania’s has come with the absence one and has been driven by foreign LCCs and more recently from a wider Baltic strategy from the aptly named Latvian flag carrier airBaltic

It is back to the Middle East for the third position, held by Dubai, one of the United Arab Emirates (UAE). It has emerged from its energy roots to become recognised as a global centre for trade, tourism, and real estate. Its main gateway of Dubai International airport has overhauled London Heathrow as the world’s busiest international airport and become a major global hub thanks to the global expansion of Emirates Airline.

Two very different destinations make up the remainder of the top five positions – Reykjavik, Iceland with a population of around 125,000 (the lowest among the 20 cities) and Shanghai, China, with a population of approximately 27 million (the highest among the 20 cities). Denpasar, Bali, Indonesia; Kigali, Rwanda; Beijing, China; Liverpool, England; and Porto, Portugal, make up the rest of the top ten. 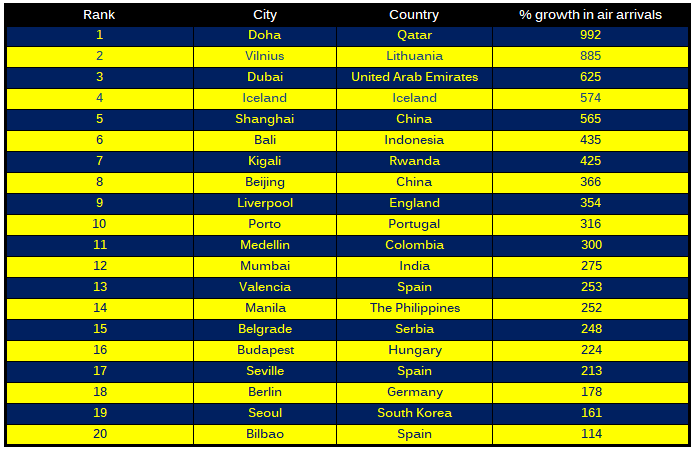