United Airlines capacity in the Australia market will reach a 20 year high as it introduces a nonstop flight from Sydney to Houston. United’s Australia traffic should approach 600,000 passengers in 2018, a level last reached in 1997 and 1998.

United announced on 7-Sep-2017 plans to launch a daily service between Sydney and Houston on 18-Jan-2018 using 252-seat 787-9s. United for the first time will have four daily flights in the Australia-US market. It currently operates daily flights from Sydney to Los Angeles and San Francisco and from Melbourne to Los Angeles – all using 787-9s.

United began deploying the 787-9 in Mar-2016 on its longstanding Sydney to Los Angeles and San Francisco routes. United used the 787-9 to launch Melbourne-Los Angeles in Oct-2014. Melbourne had been via Sydney for 12 years and until 2002 was served via Auckland.

United’s capacity between Australia and the US west coast has been flat the last several years. While the launch of Melbourne-Los Angeles resulted in a 50% increase in frequencies, the number of seats did not increase as Sydney-Los Angeles and Sydney-San Francisco were down-gauged to smaller aircraft.

United had 5,326 weekly one-way seats from Australia to the US in early 2014, when all of its flights were still served with 374-seat 747-400s. United currently has 5,292 weekly seats to and from Australia. The 2014 figure excludes Guam; United took over the Cairns-Guam route from Continental following its 2010 acquisition of Continental but dropped the route, which was served with one to two 737 weekly flights (depending on the time of year) in 2015.

With the launch of Sydney-Houston, United will have 1,344 one-way weekly business class seats from Australia. Its total capacity in the Australia market will also increase to a record 7,056 weekly seats. Economy capacity (including extra legroom Economy Plus seats) will reach 5,712 weekly one-way seats, compared to 4,340 weekly seats in early 2014 (excludes Guam) and 4,284 seats currently.

United is now the seventeenth largest foreign airline in Australia based on weekly seat capacity, according to CAPA and OAG data. The upcoming expansion will enable it to move up two places to number 15. 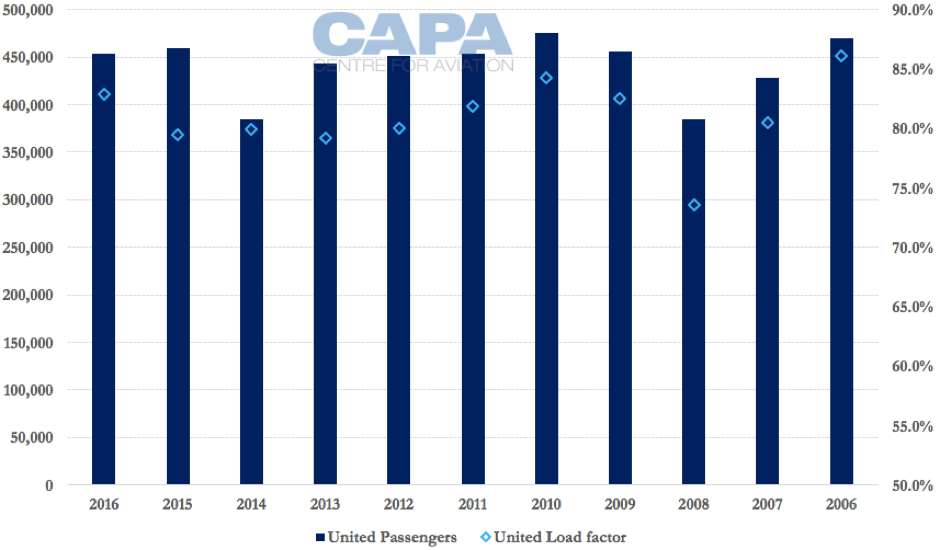 The launch of Houston enables United to offer Sydney passengers a multitude of new one-stop connections in the eastern half of the US (particularly the southeast region) and Latin America. American/Qantas are now the only one-stop competitor in many of these city pairs, which they have been able to serve since Qantas launched nonstop flights from Sydney to American’s Dallas hub in 2014.

Sydney-Houston is also a relatively large local market which Air New Zealand has been able to corner after launching Auckland-Houston services in late 2015. Australians account for more than 20% of Air New Zealand’s Houston traffic.

Sydney-Houston will become United’s second longest route after Singapore-Los Angeles, which will become the world’s longest route when United launches it with 787-9s on 27-Oct-2017. United’s current longest route is Singapore-San Francisco, which it launched with 787-9s in 2016. United initially expected payload limitations from San Francisco to Singapore during winter months but has been able to operate the flight without any limitations, giving it the confidence to pursue even longer routes with the 787-9.