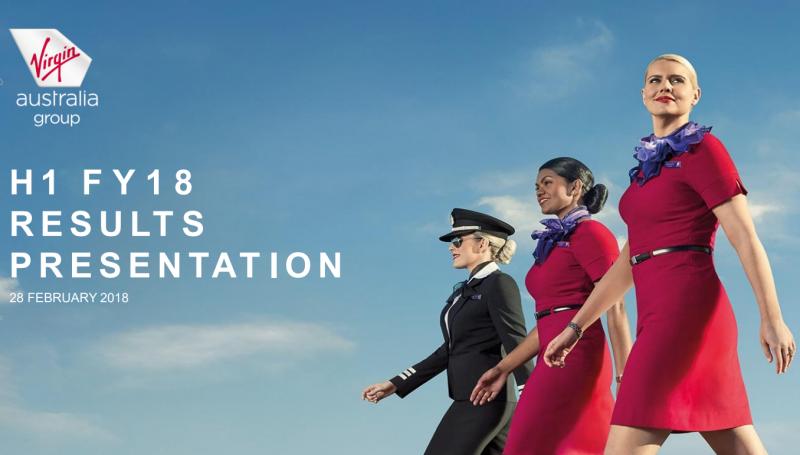 Virgin Australia Holdings Ltd released its First Half Financial Year results today for the six months ending 31-Dec-2017. The presentation included information on its fleet, loyalty programme and outlook for 2018. The AUD102.5 million (USD80 million) underlying profit before tax result was up 142.3%, driven by factors including unit revenue and passenger growth, capacity and network optimisation and further progress in implementing its Better Business programme.

“The Group has significantly improved its underlying financial performance compared to the prior corresponding period, recording one of our strongest ever first half results. This demonstrates the success of our long-term strategy to reposition the business and strengthen its financial foundation; however, there is more work ahead to ensure we continue to deliver”.

On Virgin Australia Group’s fleet, Mr Borghetti said: “Importantly, we have continued to invest in maintaining a young and efficient fleet while reducing our Financial Leverage. This has been achieved through delivering a strong operating cash flow and maintaining a disciplined approach to non-aircraft capital expenditure”.

On rising fuel costs, Mr Borghetti said: “The Group was highly hedged against adverse movements in fuel prices and therefore the impact of rising fuel prices during this period was limited. The increase in fuel costs was also partially offset by the impact of favourable foreign exchange movements with the stronger Australian Dollar. For the remainder of the 2018 financial year, the Virgin Australia Group has hedged 95% of its foreign currency exposures and 95% of its expected fuel consumption.”

Virgin Australia Group CEO and MD John Borghetti reported the group continued to improved its balance sheet during H1FY2018, reducing total debt by AUD363.8 million (USD283.7 million) and improving financial leverage by 4.4% year-on-year to 4.3x. The group recorded its strongest financial leverage result for 10 years said Mr Borghetti, while cash generated from operating activities improved by 88.6%. Mr Borghetti said the result "demonstrates the success of our long-term strategy to reposition the business and strengthen its financial foundation; however there is more work ahead to ensure we continue to deliver".

Highlights for individual business segments include:

Virgin Australia Group stated that based on its recent positive performance trajectory, current market conditions and fuel headwinds net of foreign exchange for H2FY2018, the board expects underlying performance for H2FY2018 to improve compared to the Group's underlying performance for the H2FY2017. Virgin Australia Group CEO and MD John Borghetti said the group wants to "build on the progress we've made in the domestic market, by continuing to consolidate Virgin Australia's position and expediting Tigerair's fleet transition and network optimisation. Internationally, the airline will "continue to enhance our customer offering through our alliance partnerships and assess opportunities for expansion into Greater China" said Mr Borghetti.

Virgin Australia to repurchase 'unmarketable' parcels of shares, confirms no intent to privatise

Virgin Australia announces changes to board